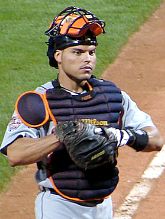 After another late-season collapse, we would think the Mets would be hell-bent on fortifying the bullpen, figuring out what to do with the second base issue, deciding on who to bring back and/or acquire for the starting rotation, whether they’ll pick up the option on Carlos Delgado, and who the 2009 left fielder might be.

That said, you would think that the catching position is one that is more or less set, particularly considering Brian Schneider’s strong second half.

Yet, a day after the regular season ended, it is rumored that Pudge Rodriguez — who will be be a free-agent this winter — contacted the Mets and is very interested in leading the club into the postseason next year.

Loyal readers of MetsToday know I’m a huge fan of Pudge, and though in hindsight the Yankees trade for him didn’t pan out as well as they’d hoped, I think he’s a great fit for the leaderless Mets.

Yes, Pudge is only a shell of his former self. Yes, he’s yet another old player who is bound to break down — and don’t we want to get away from the Moises Alou types?

Obvious points. However, the Mets are DESPERATE to change the culture in the clubhouse. Injecting Ivan Rodriguez into that clubhouse is a great first step. It’s not the complete answer, but it’s a start. The guy has been a top player and a winning player his entire career — winning as in the way he approaches the game and conducts himself. He is a leader as an example, vocally, on the field and off. And he is one who has led teams into the postseason in the past. He owns championship rings and he would command instant respect. How many 2008 Mets can say that? Further, how many players with Pudge’s credentials will be easily acquired in the offseason? These throwback type of leaders are going the way of the dinosaur.

If the Mets were to sign Pudge, I believe it makes sense to keep around both Brian Schneider and Ramon Castro, because he’s not going to catch every day and there is a chance he’ll be on the DL at some point. The Mets should try to keep three backstops anyway, and for this to work, Pudge (or Castro) would have to be comfortable with a second position. Pudge played a handful of games at 1B in 2006, and surely can play adequately there again. He may be athletic enough to handle left field as well. Castro? Not so athletic, but who knows. Schneider, obviously, doesn’t hit enough to experiment with, but I’d keep him around. Schneider, in addition to his strong defense, also is a positive clubhouse guy and potential leader. I can easily envision a platoon situation where all three players contribute throughout a 162-game season, and all remain fresh.

Bringing in Pudge, in my mind, would be a good start to changing the personality of this team, while adding a little punch to the lineup. What do you think?