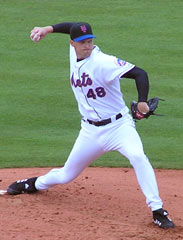 After this season, it seems everybody hates Aaron Heilman, and anyone watching, rooting for, or writing about the Mets, would recommend that the Mets find a way to cut ties with the tall righthander.

But that notion makes no sense at all.

First of all, consider that Heilman pitched the entire season with an injury that may have affected his performance. Secondly, remember that for the third year in a row, the Mets put him into a situation that he really isn’t built for — not physically nor mentally. Third, and also for the third consecutive season, the Mets overused (abused?) Heilman. Despite appearing in only seven games in September, Heilman still finished seventh in the NL in appearances with 78. It was already established in previous years that Heilman does not respond well to overuse (not many pitchers do, for that matter). Yet, invariably, the Mets manager — whether it was Willie Randolph or Jerry Manuel — continued to put him on the mound in all kinds of situations, following their inane strategy of “riding the hot hand”. No other Mets pitcher was asked to do what he did — whether it was pitch four days in a row, pitch multiple innings in back to back days, or “take one for the team” in extra-inning ballgames. Did you know, for example, that Heilman TWICE threw 57 or more pitches in a game? And that in one of those instances, it was his third appearance in as many days? The way he was abused, I won’t be surprised to find out that Heilman’s knee surgery will be combined with some kind of elbow surgery.

One of the biggest reasons, however, not to trade Aaron Heilman is this: he has very little value right now. He has more value to the Mets as a potential starting pitcher, than he does in any trade. I think we’re all in agreement that Heilman should NOT return to the Mets bullpen in 2009, but doesn’t it make sense to finally give him a legitimate opportunity to earn a spot in the starting rotation?

Think about it — BEFORE his poor season, the best the Mets could get back for him, supposedly, was a fourth outfielder such as Marcus Thames. What do you think Heilman would bring back now? At best, someone like Argenis Reyes?

The Mets are losing Pedro Martinez and Oliver Perez to free agency, and John Maine’s return is no guarantee. That means there are at least two open spots in the rotation, and possibly a third. Personally, I’m not ready to hand over one of those spots to Jon Niese nor Bobby Parnell, and the Mets aren’t going to sign any of the big-name starters (i.e., C.C. Sabathia, Ben Sheets, AJ Burnett). Even if they did, there will would likely be a spot up for grabs come spring training — why not give Heilman a shot?

The Heilman haters will argue that if Aaron can’t pitch one effective inning, how can he pitch 6 or 7? Of course that is a ludicrous argument — there is a huge difference in optimizing performance for the everyday, random use of a reliever compared to the structured routine of a starter. Heilman showed he has the stuff to get MLB hitters out — he just wasn’t able to do that 3-4 times a week. There is a possibility that, given the opportunity to throw on a regular schedule, he can translate that 96-MPH sinking fastball, changeup, and slider into a decent fourth or fifth starter.

And if Heilman doesn’t win a starting job out of spring training, the Mets have two excellent options: one, he can be the team’s long reliever — filling the role Darren Oliver left behind two years ago. Or, you can trade him — he’ll have the same or better value as he does right now.

For four years the Mets have been forcing this square peg into a round hole. The main excuse was, “he’s too valuable to remove from the bullpen”. (Oh, there are other myths, all dispelled a long time ago here.) Today, I think everyone agrees that Heilman has almost no value to the Mets as a reliever. Before you give him away for a journeyman minor leaguer or non-prospect, why not go back to the original plan when he was a #1 draft pick — make him a starter. Either the Mets trade him and get nothing or keep him and might have something that is relatively difficult to find cheaply — a starting pitcher. Seems like a no-brainer to me.

Back Bad News for Burgos
Next A Look Back