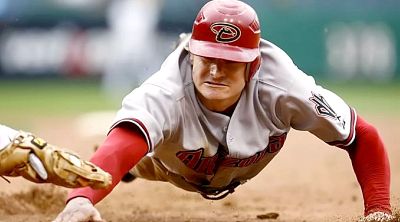 A few days ago, MetsToday reader “Isuzudude” pointed out a suggestion by an Arizona writer that the Diamondbacks could consider trading outfielder Eric Byrnes to the Mets in return for Luis Castillo. The article has since been referred to and discussed by MetsBlog, and I think it merits conversation here.

Though it’s only speculation by a journalist, it does appear on the surface to be a fitting deal for both clubs. The Mets would rid themselves of both a bad contract and a guy who hometown fans have grown to hate. In return, they get a much-needed righthanded-hitting corner outfielder and a guy who enjoys and seeks attention — something they desperately need in a clubhouse full of camera-shy introverts.

On the other hand, the Diamondbacks get a veteran second baseman to fill the hole that will presumably be left behind if/when Gold Glove winner Orlando Hudson goes to the highest bidder on the free agent market. Since Castillo is owed another $18M through 2011, and Byrnes has $22M over 2009-2010, the money situation is close to a wash. It would seem to be a perfect match.

Personally, I’d love to see hard-playing Byrnes come to the Mets, and believe he would jump at the chance to be in the media capital of the world. He already has his own TV show in Arizona, regularly appears on ESPN, and does a radio show on XM … imagine how his career might take off in New York?

Of course, it would also be great if he can play some left field — he missed over 100 games in 2008 with injuries to both hamstrings. That’s a major issue for a guy who plays at only one speed — full — and will be 33 years old by spring training. Especially considering that his ability to run is a major part of his game, both offensively and defensively. Yes, he’ll hit for occasional power, but at this stage of his career I don’t see him being more than a 15-20 homer guy. If he doesn’t have his foot speed, he won’t have the added benefits of 30-40 stolen bases, singles turned into doubles, and robbing the opposite team of hits to the outfield. In other words, he might evolve into a righthanded, egocentric Shawn Green — which wouldn’t be the worst thing in the world, but it wouldn’t necessarily be an upgrade, either.

If Byrnes is no longer an everyday player, or has difficulty staying healthy, then the Mets are placed into a similar quandary they had with Moises Alou the past two years. Except this time, they should have Nick Evans, Daniel Murphy, etc., as a backup plan. I like the idea of bringing in Byrnes as part of a platoon / as a fourth outfielder. Counting on him to be the starting leftfielder, playing in 140 games, and expecting a season like he had in 2006 or 2007, however, is irresponsible.

Naturally, there are many fans who believe any deal that rids the team of Luis Castillo is a good one. To me, getting back Byrnes is a great plan, assuming the Mets will also be the top bidder for, ironically, Orlando Hudson. Unlike most, I’m not convinced Daniel Murphy is the answer at second base. From what I’ve seen of him, he doesn’t have the feet nor the quickness to play the position well. But more on that in a future post. I suppose the ideal situation is to trade Castillo for Byrnes, have Murphy platoon with Byrnes in left field, and sign Orlando Hudson (or another second baseman … Mark Ellis? David Eckstein? Rafael Furcal?).

Or perhaps the Mets are better off finding someone else to play left field, or looking to Fernando Tatis, Nick Evans, and Murphy to man the position again. Maybe they’re already committed to forcing Murphy into becoming a second baseman, and it will make sense to keep Castillo around as a backup plan.