Finally, the mystery has been revealed as to why Omar Minaya did not make a trade to help push the Mets into the postseason.

He was trying to make a trade with this guy: 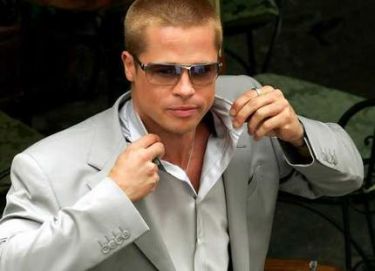 And you can’t blame Omar for mistaking the famous Hollywood actor Brad Pitt for Oakland Athletics general manager Billy Beane. After all, the two men look strikingly similar — so much so, that in the upcoming movie “Moneyball”, Pitt is playing the role of Beane. (No word yet on who will be playing the roles of Art “Light Up a Room” Howe or Rick Peterson.)

So while Jim Hendry and Pat Gillick were prying away Rich Harden and Joe Blanton from the real Billy Beane, Omar Minaya was discussing a deal for Huston Street over lunch with Beane’s imposter: 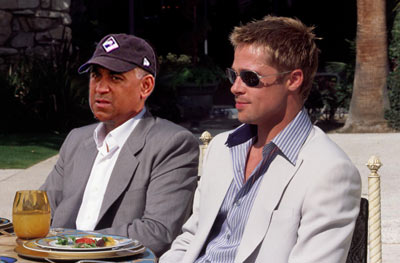 Apparently, this was part of Pitt’s “research” in understanding and performing his upcoming role. According to Pitt:

“I’m a method actor, and the only way to really ‘get’ a character is to step inside his skin — to literally BE that person. I had to walk like Billy Beane, talk like him, dress like him … quite simply, I had to be Beane.”

Major League Baseball should investigate this situation immediately, since Pitt obviously had a hand in altering the outcome of the 2008 season. Had Minaya been speaking with the REAL Billy Beane, perhaps the Mets would have acquired the arms and bats they needed to get to the postseason. Based on the facts, it’s not out of the question to award the Mets with the NL East title, add Huston Street, Justin Duchscherer, and Brad Ziegler to the roster, and and have them play the Phillies in an impromptu 3-game series to decide the true NL champion. Heck, there’s plenty of time to do it, and it will generate a few extra hundred million in lost TV ads.

I implore you Bud Selig: do the right thing.

Back Chance of Lowe is Low
Next Dumping Castillo