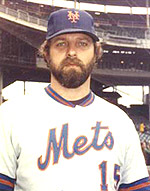 “Dave Roberts’ agent, John Boggs, said yesterday that the Mets and 12 other clubs had expressed interest in the left fielder. The 34-year-old hit .293 with two homers and 44 RBIs for the Padres this past season.”

When I first read this, I thought for sure they were talking about inviting David Arthur Roberts, the scrub lefthanded pitcher from the 1981 Mets, to Oldtimer’s Day — or maybe a Mets Fantasy Camp. Roberts might round out a rotation of Craig Swan, Kevin Kobel, Pat Zachry and Charlie Puleo for the Fantasy Mets (and you thought our 2007 rotation was questionable!).

Then I realized that Joel Sherman was talking about Dave Roberts, the ugliest outfielder in MLB history and the man who made “The Steal” in 2004.

Hmm … why would the Mets be interested in THAT Dave Roberts, when they already have a cheaper, younger, and more productive version of Roberts in Endy Chavez?

It’s the kind of blurb that easily gets lost in the middle of a column, ignored by most as simply an agent trying to drum up interest in his client.

Instead of passing it off, let’s examine the possibility that it is indeed true.

There is one reason why Omar Minaya would call John Boggs to express interest in Dave Roberts: the Mets are looking to go with a LF platoon of Roberts and another veteran such as Moises Alou, because, the Mets are working on a trade involving Endy Chavez.

Excellent defensive centerfielders with the ability to provide speed and the potential to lead off are currently a hot commodity. To find this type of player for cheap is next to impossible. Ask the Florida Marlins, who are desperate for a speedy centerfielder who is relatively young and is affordable. The only options are Brian Anderson, Willy Taveras, Chris Duffy, and — Endy Chavez.

Anderson is not necessarily a great target — he hit only .225 in his rookie season. And the White Sox seem more interested in trading one of their veteran pitchers — Freddie Garcia, Mark Buehrle, Javy Vazquez — in return for a bat. Likewise, Willy Taveras is not exactly on the Astros’ trading block, considering that they also are looking for bats and seem fairly happy with Taveras thus far. Duffy might be available, but didn’t exactly set the world on fire last year with his .255 average. That puts Chavez into the mix, as he’s not starting in front of Carlos Beltran and therefore somewhat expendable — and he’s paid a cheap $500,000 salary.

Knowing Omar Minaya, I smell a deal. Could he be ready to send Chavez, Aaron Heilman, Brian Bannister, and perhaps Henry Owens to the Fish for Dontrelle Willis? Or maybe it’s a package of Chavez and Mike Pelfrey or Philip Humber?

Perhaps there’s a three-way deal in the works, involving Chavez and Owens (the Fish need a closer), going to the Marlins, the Marlins sending a bat (Josh Willingham?) to Chicago, and the White Sox sending Garcia to the Mets.

Of course, this is all mere conjecture. Most likely, the little blurb in the Post can be rightfully dismissed as an agent overhyping his client to create a demand that doesn’t exist.

But then, it’s the Hot Stove season, and we don’t have much else to do but make up wild trade possibilities. And, you never know …

Back Jose Valentin Re-signed Quickly
Next The Forgotten Deals