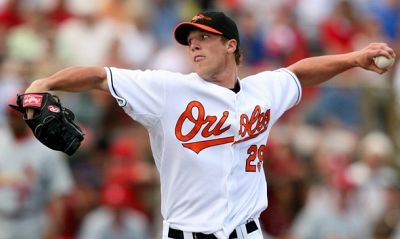 No, Adam Loewen is not intentionally straining the ligaments in his ankle. Rather, he is following in the footsteps of Rick Ankiel, and reinventing his pro career as a hitter.

He’s still lefthanded, and still 6’6″, but no longer has a rocket launcher attached to the left side of his body. His career path from the mound has been decimated by injuries and inconsistency. He suffered a second stress fracture to his elbow this past season, an injury that would have set him back a minimum of a year. Instead of taking the grueling road back, and in the process seeing his value as a pitcher continue to dwindle, the young Canadian decided to change his job description.

“He has every bit as good a chance of doing what Rick Ankiel did. I wouldn’t bet against him,” said one American League scout who watched both when they were in high school.

“He was very similar to Rick Ankiel in high school, both as a pitcher and as a hitter. Ankiel might have been more advanced pitchability-wise, but Loewen’s weapons were every bit as good. You could probably dream a little more on him.

“As a hitter, Loewen had more raw power, and they were very close in putting the ball in play. They were in the same conversation, the same kind of animal, really.”

At 24 years of age, there’s still time for Loewen to make the transition, though he’ll have to progress quickly. His arm issues all but ended the chance to fulfill the bright promise as a pitcher the Orioles saw when they made him the 4th pick overall in the 2002 draft. In 35 MLB games over parts of three seasons, Loewen posted an 8-8 record with a 5.38 ERA. Even if he were able to come back from the most recent elbow injury, he likely wouldn’t have the velocity that dominated minor league hitters six years ago. So it’s not much of a gamble on his part — more a last-ditch effort to salvage his career as a baseball player.

The gamble, rather, is on the Blue Jays, who swooped in quickly to nab Loewen after the Baltimore birds dropped him from their 40-man nest. And for the Jays, it’s worth the chance. After all, it’s a great story — Canadian boy returns to his home country to chase his dream, against insurmountable odds. Not to mention that he might just be able to pull it off.

“If Adam Loewen was in the amateur draft this year, at 24, would he go in the top five rounds as a hitter? I’d say yes,” said the AL scout. “It’s worth the chance, for sure. I think he could do it.”

Of course, Adam Loewen’s comeback has nothing at all to do with the New York Mets, but it’s the first intriguing story of the Hot Stove Season, and worth watching.