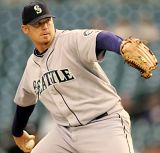 Mets fans — myself included — tend to look at the winter market in a vacuum, seeing things only from the Flushing perspective. Unfortunately, there are 29 other teams in MLB, and many of them are — like the Mets — looking for a closer.

When it comes to free agents, the Mets have the advantage of deeper pockets than most teams — and there are few teams willing to consider the figure that Francisco Rodriguez will command. But if the Mets don’t get K-Rod (and hopefully, pass on Brian Fuentes), do they really have a chance to land a solid closer via trade?

Omar Minaya has insisted that the Mets “have the depth” to acquire a closer. But, number one, is he talking about a shaky closer (Kevin Gregg), a closer with plenty of question marks (B.J. Ryan), a closer who is coming off a bad year (J.J. Putz), or a legitimate, lights-out closer (Bobby Jenks)?

I don’t doubt that the Mets have the goods to trade for someone with closing experience. I’m just not sure that I’d (a) be happy with the “closer” acquired; or (b) judge the deal as fair for both sides.

The problem is that because most teams in the market for a closer can’t afford K-Rod, most are instead looking to make a trade. These are just a few of the teams likely in the market for a closer: Tigers, Angels (assuming they don’t re-sign K-Rod), Cubs (if they don’t re-up Kerry Wood), Indians, Rangers, Rockies (if they don’t sign Fuentes), Brewers, and Cardinals. In addition, the Braves may be looking to add, say, Huston Street, as a setup man or insurance against Mike Gonzalez. Similarly, the Diamondbacks may not be so convinced Chad Qualls is the answer as their 9th-inning man. The Dodgers are likely looking for an extra arm, with Joe Beimel a free agent and 38-year-old Takashi Saito no guarantee after a major elbow injury.

I’m not saying the Mets can’t compete with those teams in trade talks — rather, that the breadth of competition creates increased demand. So instead of the Mets trading, say, Jon Niese and Bobby Parnell for a J.J. Putz, the market condition bloats that package to include Dan Murphy and/or Fernando Martinez. Put another way, instead of getting a Kevin Gregg for a AA suspect (i.e., Michael Antonini), the cost is now an MLB-ready prospect or two (i.e., Niese and Parnell). In essence, paying double.

If my theory is correct, the Mets may be better off trying to sign someone like Brandon Lyon to a short-term, inexpensive deal (if that’s possible) — similar to what they did in the 2003-2004 winter with Braden Looper. In other words, get a stopgap, and hope that either the market conditions change, or someone from within (Brant Rustich? Brad Holt?) takes the fast track toward a 2010 / 2011 debut.

Back George Sherrill Available
Next Rosenthal: Mets hot for Sonnanstine