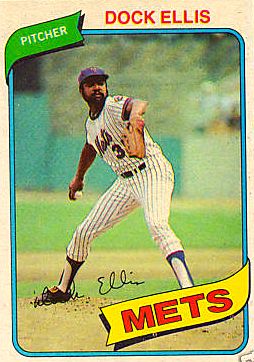 The man who claimed he pitched a no-hitter while high on LSD has passed on at the age of 63.

Dock Ellis — and yes, “Dock” was his given first name — enjoyed a colorful 12-year career in the big leagues during the 1970s, including a 17-game stint with the Mets in his final MLB season in 1979. Strangely, his 1980 Topps baseball card displays him as a Met, despite the fact that the Pirates purchased his contract from New York in late September of 1979. Unfortunately for Ellis, the deal came too late to be included on the postseason roster, in the last year the Pirates made it to the World Series (and won).

Interestingly, Dock Ellis was once traded for Doc Medich. It was a deal that also sent Willie Randolph from the Pirates to the Yankees — one of a string of steals by Yankees GM Gabe Paul in the mid-seventies.

Looking back on his career, one of his best seasons — when he went 17-8 with a 3.19 ERA in helping the Yankees get to the World Series in 1976 — Ellis struck out only 65 and walked 76 in 212 innings. The sabermetricians would have had a field day with those numbers had they been around back then.

But the numbers weren’t the craziest thing about Dock Ellis … in addition to pitching on acid, he also wore curlers on the field, was once maced by a security guard, and began one of his starts against the Reds by intentionally plugging the first three batters he faced. He tried to bean the fourth, as well, but Tony Perez managed to duck four times and draw a walk.

After his playing career, Ellis eventually cleaned up and remained sober to his dying day. He devoted a good portion of his time during retirement counseling ballplayers on the dangers of drugs.

I’ll leave you with this, from the 2005 Dallas Observer article “Balls Out” — which by the way is an excellent article, and a fair alternative to purchasing Dock Ellis in the Country of Baseball

on June 12, 1970, Pittsburgh Pirate and future Texas Rangers pitcher Dock Ellis found himself in the Los Angeles home of a childhood friend named Al Rambo. Two days earlier, he’d flown with the Pirates to San Diego for a four-game series with the Padres. He immediately rented a car and drove to L.A. to see Rambo and his girlfriend Mitzi. The next 12 hours were a fog of conversation, screwdrivers, marijuana, and, for Ellis, amphetamines. He went to sleep in the early morning, woke up sometime after noon and immediately took a dose of Purple Haze acid. Ellis would frequently drop acid on off days and weekends; he had a room in his basement christened ‘The Dungeon,’ in which he’d lock himself and listen to Jimi Hendrix or Iron Butterfly ‘for days.’

A bit later, how long exactly he can’t recall, he came across Mitzi flipping through a newspaper. She scanned for a moment, then noticed something.

‘Baby,’ she replied. ‘It is Friday. You slept through Thursday.’

Ellis remained calm. The game would start late. Ample time for the acid to wear off. Then it struck him: doubleheader. The Pirates had a doubleheader. And he was pitching the first game. He had four hours to get to San Diego, warm up and pitch. If something didn’t happen in the interim, Dock Philip Ellis, age 25, was about to enter a 50,000-seat stadium and throw a very small ball, very hard, for a very long time, without the benefit of being able to, you know, feel the thing.

Which, it turns out, was one of the least crazy things that happened to him on that particular day.