Who Is Chip Ambres and Why Do We Care?

On December 19th, the Mets added invited several non-roster players to spring training, among them, Chip Ambres. The move was about as loud as a mouse fart, though a few decibels quieter. Very few, if any, Mets fans know who Chip Ambres is, and if they do, they likely had no idea he would be stealing precious at-bats from Ruben Sierra, David Newhan, Ben Johnson, and Lastings Milledge, among others.

So who is this guy and what is he doing in Port St. Lucie?

First, Chip Ambres is an outfielder. He’s 27 years old, and played in 56 games last year in Omaha, for the Kansas City Royals AAA club. His only MLB experience came in 2005 with the Royals, when he played in 53 games and hit .241. His real name is Raymond.

I can see you’re still scratching your head, wondering why the Mets would bother to bring in a guy who couldn’t crack the Royals roster all of last year, at 27 is too old to be a prospect, and with such limited time in MLB can’t even offer veteran leadership or experience. So again, why is he donning the blue and orange in sunny St. Lucie right now?

In contrast to the negatives, Chip Ambres has some positives — enough for the Mets to give him a good hard look this spring. Ambres was drafted with the 27th pick in the first-round in 1998 by the Marlins out of West Brook HS in Beaumont, Texas, where he was a 2nd-Team All-American. However, he “slipped” that low because of signability concerns — football was his best sport. Ambres was a highly recruited QB — so skilled that Texas A&M signed him to a letter of intent and planned to change their offense to make best use of his talents. As a result, he signed late (for a $1.5M bonus) and didn’t start his professional career until 1999. He immediately turned heads by batting .353 in Rookie League as a 19-year-old, and Baseball America ranked him as the Marlins’ #7 prospect — one notch above Preston Wilson. He moved up to #6 in the organization in 2000, but had some injury issues and was overmatched in high-A ball, struggling to hit .231. The rest of his minor league career was marred by inconsistency and nagging leg injuries from his football days.

Ironically, Ambres shared the outfield pasture with Choo Freeman at AA Carolina in 2002. Freeman had been a highly recruited wide receiver in 1998, also signing with Texas A&M but also eventually choosing baseball. There’s an old but interesting article about the two “finally” becoming teammates at Baseball America.

Strangely, the Seattle Mariners drafted him in the 30th round of the 2000 draft. I’m guessing they did not realize he was already a professional. Interestingly, he was chosen 9 spots after the Rockies threw away their pick on Virginia Tech’s Michael Vick. Maybe the 30th round is reserved for waste picks and quaterbacks?

Back to the Facts

Ambres had a strong 2004 in AA, batting .265 with 20 HRs 65 RBI and stealing 26 bases, but it was his second year in the league and he was 24 years old — too little, too late. After that season, he was granted free agency and caught on with the Boston Red Sox organization.

In 2005, he finally busted out, stealing 19 bases and hitting .294 with 10 HRs, 20 doubles, 3 triples and 50 RBI in only 84 games for Pawtucket. His breakout, half-season performance turned Ambres into a valuable commodity, and the Red Sox traded him to the Royals as part of the deal for Tony Graffanino on July 19th. The Royals immediately placed him on the Major League roster and inserted him into the #7 spot in the lineup the following day; he went 2-4 with a double in his big-league debut, as the Royals beat C.C. Sabathia and the Cleveland Indians. His next start came on July 21st and he went 2-4 again, with an RBI and a stolen base, as KC beat Ted Lilly and the Blue Jays. He hit his first Major League home run about a week later, against — would you believe — Scott Kazimir, as he had 2 RBI and 2 runs scored batting in the second spot in the lineup. His batting average at that point was .471, and through August was often in the starting lineup, usually either leadoff, second, or fifth. By the end of August, however, his bat cooled and his playing time lessened as the Royals gave more at-bats to Aaron Guiel. He spent much of September flip-flopping with Guiel as the Royals’ sometime starting centerfielder, batting leadoff or second. Clearly, Kansas City was trying to figure out which of the two were worth keeping on for 2006 — or they were showcasing their talents as trade bait. 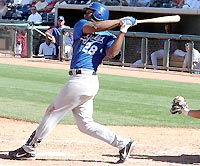 As it turned out, Ambres and Guiel were the lead candidates in a competition for one of the backup outfielder spots in the Royals’ 2006 spring training. Unfortunately, neither impressed the Royals, Chip batting only .180 in the spring, and prospect Shane Costa came out of nowhere to make the club as the fifth outfielder. Guiel eventually was waived (to be picked up by the Yankees), and Ambres spent another injury-prone year in AAA, appearing in only 56 games and batting a dismal .203 before season-ending shoulder surgery on June 20th.

He may be a longshot to make the club, but he has some skills that could be useful to the Mets. When healthy, he runs with above-average Major League speed and can steal a base. At the plate the scouting reports say he has good plate discipline and strike zone judgment. In the field his arm is below average but he makes up for it with excellent range, athleticism, good instincts, and versatility — he can play all three outfield positions. In addition to his skills, Ambres has always been viewed as eager to learn, a hard worker, and an ideal teammate. His attitude is at least part of the reason he’s hung around pro ball for so long.

While Chip Ambres may be sent to minor league camp before the exhibition games start, if he’s healthy there’s a slight chance he’ll see some spring action. From his resume it doesn’t appear that he’ll be a threat to Shawn Green nor Moises Alou, but his skills and makeup might suit him perfectly as a bench player — an ideal righthanded bat to use as a pinch-hitter, with enough speed to stay on the bases (or be used as a pinch-runner). With a little luck, he could be this year’s Endy Chavez.

Back The Business of Milledge
Next Pitching: Perfect World