Fun for Kids, Sort Of 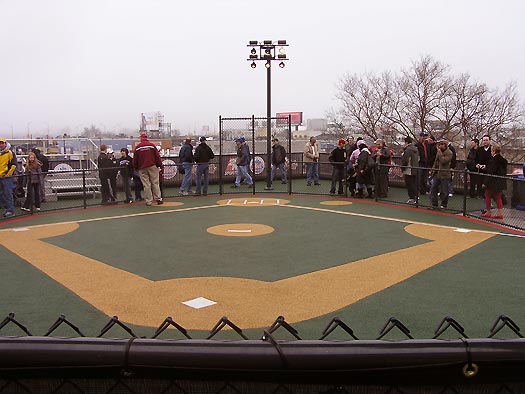 It’s a ballpark within a ballpark! Next to the food court above right-center field is the “family area”, which is equipped with a fenced-in mini-diamond that could be a great place for tykes to play some wiffle ball, but in reality will likely be too small to serve as anything other than a romper room.

A few feet away is a pair of batting tunnels, though without pitching machines. There are “L” screens, however, so I guess that there will be some college interns tossing BP. Five swings and out, NEXT! 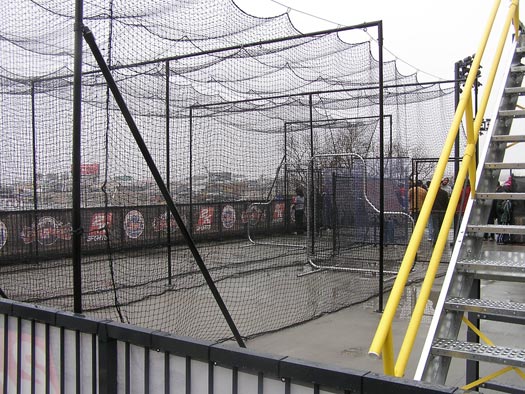 I get the idea of keeping kids with short attention spans entertained during a “boring” baseball game — the longer the family stays, the more money they spend in the park! But this is a feeble attempt at family fun, and the placement near the taco stand and shake shack in theory makes sense but again, the reality is that the area is going to be too cramped for all this activity. If the Mets wanted to create a great place for the entire family to enjoy the ballgame, they should have taken a lesson from Turner Field in Atlanta, which has a huge indoor wiffle ball stadium, arcade, multiple batting tunnels, running bases, and a sprawling outdoor area with multiple picnic tables set below a monstrous video screen. Actually there’s a lot more than that at Turner — see it all here.

Maybe I’m being too critical, but I’m envisioning a major, annoying bottleneck as I make my way to a rack of Kansas City ribs. More to the point is starting the great idea of the family environment, but then stopping short of making it a fulfilling experience. Instead, it’s an exercise in futility and frustration. Either do it right, do it all the way, or don’t do it at all. (Hmmm … sounds familiar, doesn’t it?)

In the next post, we take a bite of an expensive pulled-pork sandwich.