Ambiorix Burgos – To the Rescue? 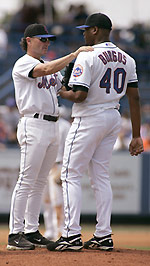 Certainly the Mets cannot be really counting on Chan Ho Park to be an 8th-inning bridge alongside Aaron Heilman. A guy who gives up gopher balls is the last person you want trying to put out fires and holding slim leads.

Rather, they’re retrofitting Park into the setup role because he lost the fifth starter spot to Mike Pelfrey, and it makes more sense to hold on to a possibly coveted, veteran arm, than release him outright.

As much as Mets fans would like to see Lastings Milledge start two or three games in the first two weeks of the season, it would seem that the Mets will need the 25th roster spot to continue auditions for the bullpen. Pelfrey will remain in Florida for extended spring training until mid-April, and my bet is that the Mets keep Ambiorix Burgos and/or Jon Adkins on the roster to continue competing for a bullpen spot. Chances are, Adkins will stay because he’s out of options, and showed some competence with San Diego last year. However, the Mets may instead keep Burgos around, seeing him as the man most likely to duplicate the 2006 performance of Duaner Sanchez.

Last year at this time, the Mets made the decision to keep Jorge Julio around for no other reason than the fact that he made Billy Wagner’s fastball look slow. On the mound, Julio was an emotional disaster waiting to happen, often talking to himself and visibily shaking with fright. Under the watchful eye of Rick Peterson, and the coddling of Guy Conti, the Mets slowly nursed Julio into a big league pitcher. At first, he appeared in non-pressure blowouts to build his confidence. Though his first four appearances were downright frightening for everyone involved, he eventually built up his confidence, spoke more quietly to his alter personalities while on the mound, and threw a boatload of filthy strikes. By mid May Julio had progressed to the point where he was used in extra-inning games and occasionally to finish — he picked up a win and a save in back-to-back games against the Braves just a few weeks before being shipped to Arizona for Orlando Hernandez. By the end of the season, Julio established himself as the Diamondbacks’ closer, finishing 32 games for them and saving 15. After witnessing how far Julio came from spring training through early May, it’s reasonable to consider the possibility of Ambiorix Burgos taking the same course — under the tutelage of The Jacket and Conti.

The question the Mets must answer is this: will Burgos have a better chance to be a key 2007 contributor by pitching in AAA or by the “Jorge Julio Method” ?

Interestingly, Burgos compares not only to Julio but also to another former Baltimore Oriole who came to the Mets: Armando Benitez. Burgos, in fact, is at a similar point now that Armando Benitez was as a 23-year-old: raw, electric, and completely inconsistent. Compare the numbers:

Scary, isn’t it, how similarly the two match up? The biggest difference is that Burgos was more hittable, but Benitez put nearly as many people on base via walk.

It would be nice if we could look at the 23rd year of Benitez’s life to give us an idea of where Burgos might be this year. Unfortunately, Armando had injury issues in 1996 and missed the majority of the season, pitching only 14 innings in MLB. He did make it back in time for postseason meltdowns against the Yankees, highlighted by the theft of a fly ball from Tony Tarasco’s glove.

If we’re really lucky, Burgos can blossom at 23 the same way Benitez did at 24 — not entirely out of the realm of possibility, considering that Burgos has more MLB experience already than Benitez did at that age.

Wouldn’t those be fabulous numbers to get from Burgos this year?

Of course, we can’t expect Burgos to cut his ERA by more than one half in one year. But his exploding fastball and sometimes filthy forkball do suggest great potential. He does have the following on his side:

1. A winning environment – the 2007 Mets organization is a stark contrast from the chaos of the Kansas City Royals.

3. A role with less pressure than being the closer.

4. National League batters, rather than the monsters and DHs of the AL.

If Burgos makes no improvement over last year whatsoever, the four points above alone will bring improvement on his 2006 numbers. His biggest issue last year was the long ball — and hitability in general. Part of that issue could be relieved by not having to face the Cleveland Indians anymore — they mashed him for 18 hits and 4 homeruns in just 11 innings. The Cleveland hitters clearly had his number, and it was the team he faced most often in 2006. Comparably, he faced the Minnesota Twins 9 times and had a 2.16 ERA and sparkling .96 WHIP against them … though those numbers do include two taters.

Still not great, but a little more encouraging. The hits per inning drops considerably, the homeruns drop by a third, and his ERA reduced by a half run.

Since I didn’t see many Kansas City Royals games last year, it’s hard to say why Burgos gave up so many hits and homers. However, from the few KC games I did see, it appeared that their pitching — both starting and relief — was godawful. Their games against the Yankees were downright painful, similar to watching a bad college baseball mismatch — the kind where you wonder if an inning is ever going to end, or if some kind of mercy rule can take effect. That said, how much of Burgos’ bad numbers were due to staying in a game too long — because there was no one else to save him from misery? Clearly, he was forced into the closer role before he was ready, and handed the ball in situations that we was not mature enough to handle. With the Mets this year, he won’t be counted on to be a closer, and can probably be slowly eased from a middle relief guy into a setup role, much in the way Jorge Julio was developed last year. And if he does make that kind of progress, he still wouldn’t have to be “the man” — instead, he’d be sharing duties with Aaron Heilman and, eventually, Guillermo Mota.

Granted, setting forth with a slow development plan for Ambiorix Burgos does not help the Mets’ immediate concern. However, nursing Burgos along at the MLB level for the first two months of the season may very well result in adding a signficant weapon to the bullpen before the All-Star Break — and insurance against a roidless Guillermo Mota. Based on their success with the mess that was Jorge Julio, the odds are in the Mets’ favor with Burgos.

Back Dirty Goes Down
Next Last-Minute Pickups