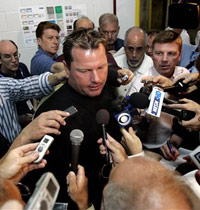 Associated Press reporter Irving Lanson found out on last Saturday that Roger Clemens made a decision about where he’d be playing in 2007.

“New York,” Clemens told Lanson, “but please keep it quiet. We’re still working on the details, and if it falls through, I may sign with the Yankees instead.”

“Hold on,” Lansing interrupted. “What do you mean, the Yankees instead? Didn’t you just tell me you decided on New York?”

Lansing heard Roger stifle a chuckle on the other end of the phone.

“I told you I was giving you the scoop of the year,” replied Clemens. “I’m signing with the New York Mets.”

Lansing was sworn to secrecy, promising to hold off on reporting the scoop until today. The Associated Press broke the story a few minutes after midnight this morning.

“We’ve been looking for an impact arm,” Mets GM Omar Minaya said. “A guy who could keep us out of losing streaks, who can shut the door. Obviously, Roger’s that kind of guy.”

Contract terms were not immediately disclosed, but rumored to be in the neighborhood of $31M (prorated).

“The money had already been earmarked,” Minaya explained. “Originally, it was supposed to go to a guy like Matsuzaka, or a Zito. Obviously, those guys didn’t work out, and when Roger became available to us, the Wilpons reassured me that the dollars were still there.”

Clemens provides the Mets with the top-of-the-rotation starter they’ve been desperately seeking since Pedro Martinez’s rotator cuff injury. Clemens will report to extended spring training in Port St. Lucie immediately, and could be ready to go by late May.

“I’m not in shape, it’s going to take a lot of work, a lot of time to get ready,” said Clemens. “I know my body, and I’m not rushing anything. If it’s May, it’s May. If not, then hopefully June. I’m preparing to pitch through the end of October,” he added, hinting at a Mets postseason appearance.

“It’s not about the money,” Clemens continued, “it’s about winning. And the Mets, in my opinion, have the best shot at a World Series title.”

One Met in particular was very excited about the news, when reached for comment at 6am: Mike Pelfrey. Pelfrey will also be in Port St. Lucie — for the next two weeks — waiting to join the club in mid-April when his fifth spot in the rotation becomes necessary.

“It’s an amazing opportunity,” Pelfrey said. “I’ll get to see how a future Hall of Famer prepares. His workouts are legendary. I’m going to soak up everything I can while I’m down here with him.”

When asked if he looked up to Clemens as a youngster, Pelfrey replied, “Absolutely. Clemens and Nolan Ryan. I modeled myself after those two, they were the best. There’s still posters of them up in my bedroom at home … I mean, my parent’s house.”

Manager Willie Randolph was more low key. Randolph was a coach with the Yankees during Clemens’ first stint in New York, from 1999 to 2003.

“Yeah, I’m looking forward to him joining us, but that’s a long time away. We have to focus on the game tonight, on Chris Carpenter and the Cardinals.”

When pressed for further comment, Randolph finally said, “He’s a competitor, no doubt about it. He’ll add another dimension to our ballclub. He’ll give us another look from the right side.”

If Pedro Martinez can return in time, the Mets could potentially have the best one-two starting pitcher combination of all time.

“That’s a long way off,” Randolph warned. “Let’s get through this week.”

Click here for more details on the Clemens signing

Back Milledge, Burgos Make the Team
Next Game 1: Win