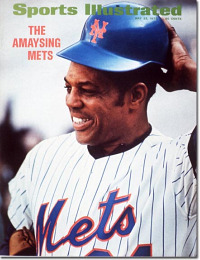 Happy Birthday to the “Say Hey Kid”, Willie Mays, the greatest ballplayer in the history of MLB.

By the time Willie returned to New York in 1972, he was a shell of former self. Make that, a shadow of a shell of his former self. He was tired, old, broken down, and downright awful, which was a terrible shame considering his remarkable accomplishments and previous vigor. But, he was still good enough to patrol centerfield in 66 games for the pennant-winning Mets in 1973, his farewell season. He hit only .211, but provided occasional glimpses of what used to be, and brought back fond memories to the old New York Giants fans who once marveled at his skills in the Polo Grounds. And, if not for that last hurrah in New York, this blog might not exist.

By the way, did anyone notice any tribute to Willie Mays in Citi Field? Anywhere? I’ve only been to the park twice so far so I may have missed it (I didn’t check EVERY men’s room yet). Oh, that’s right, there wouldn’t be anything for Mays, because he never played for the Brooklyn Dodgers. Silly me.

Back Link Roundup
Next Mets Game 26: Win Over Phillies