The game was much closer than the final score indicates.

As usual, the Mets got on the board first with a two-run initial inning, but rookie Jonathan Niese allowed the Bucs to battle back with two in the third. The game remained deadlocked until the eighth inning, as the Mets played down to their competition with sloppy baseball and head-scratching at-bats.

In the eighth, though, the Mets finally woke up and realized they were playing a bad AAA team, and were in danger of looking foolish in front of their home fans. So, they started paying attention and exerting themselves. The result was a five-run bombardment of singles, walks, and extra-base hits that resembled the blitzkrieg — it was an inning that seemed it might never end. Finally, though, Luis Castillo saw that the flogging was getting embarrassing so he kindly popped out to right to end the frame and allow the Pirates an ounce of pride.

Minutes later, J.J. Putz disposed of the first two Bucs batters, but then, like Castillo, felt kinda bad for his brethren, and allowed them a score before inducing a flyout from Nate McLouth to end the evening.

Jon Niese, with his “drop and drive” motion and big overhand curve, reminds me of a tall Jerry Koosman. For those too young to remember, Kooz is the best lefthanded pitcher in Mets history, Johan Santana included. Though, if Santana strings together a few more seasons like this one and the last one, that could change.

With a four-run lead in the ninth with two outs and J.J. Putz struggling to throw strikes on the mound, Pedro Feliciano was warming up in the Mets bullpen. I sort of understood why someone was getting ready behind Putz, but didn’t get the choice of Feliciano, who had thrown 38 pitches over the previous two days. Is Brian Stokes injured? Suffering from flu symptoms? Not good enough to shut down the bottom of the Pirates order with a 2- or 3-run lead?

For those who think that frequency of use might be marginally related to performance, Putz has thrown 144 pitches in 7 games over the last 12 days. But who’s counting?

I was lucky enough to attend the game as a guest of Francis Ford Coppola’s winery, watching from an Empire Suite. I’ll be posting pictures here on MetsToday later this weekend and wine tasting notes at WineWeekly in due course. No, Francis wasn’t there, but I did see Rusty Staub, who stopped by for a few innings and a glass of wine. 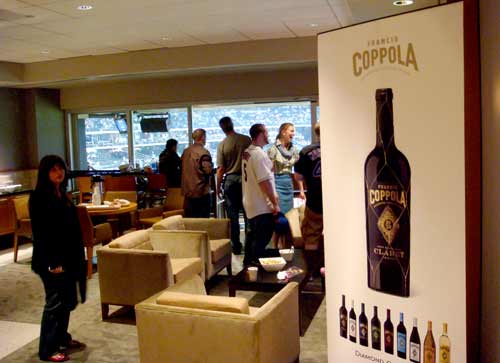 John Maine looks to extend his winning streak to three games in an afternoon contest that begins at 1:10 PM. The Pirates will send ace Paul Maholm to the mound.

Back Going to the Game
Next Mets Game 29: Win Over Pirates