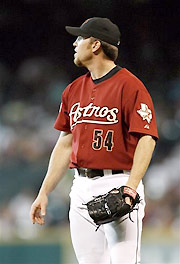 Funny how things work out …

A month ago, we were most concerned with the Mets’ starting rotation, Shawn Green’s existence in orange and blue, and the aging Jose Valentin’s glove at second base. The least of our concerns was the bullpen.

Today, however, the starting rotation appears to be a strength, Green is batting .400, and Valentin is looking like a Gold Glover. And, our largest concern is the depth and quality of the bullpen.

The eighth inning is the focus, and Aaron Heilman in particular. Performance-wise, we shouldn’t be too concerned with Heilman, even though he blew the game on Sunday. Despite giving up two runs, he managed to squeak out of a bases-loaded situation in the seventh, and threw his assortment of nasty stuff in the eighth. The Braves, plain and simple, managed to hit him. Chipper Jones, Brian McCann, and Jeff Francoeur all hit doubles that inning, and they are Atlanta’s best hitters. Heilman is good, but not invincible; sometimes the good hitters are going to get to even the best pitchers.

Heilman’s health, though, IS a concern. He had elbow surgery at the end of last year, and suffered from tendinitis in mid-March. Without Duaner Sanchez, Willie Randolph has no other trusted eighth-inning guy, and as a result has gone to Heilman in three of the Mets’ first seven games. Can Heilman handle the workload, at least until Guillermo Mota arrives in early June?

My guess is no, and the Mets need another setup guy to appear, or step — sooner rather than later. Heilman’s spring tendinitis was likely the result of throwing too much too soon. He was given a shot and about a week of rest, but that’s no guarantee the tendinitis won’t flare up again, considering Heilman’s already fragile elbow and his pitching motion — which once again is is off kilter. Already, Heilman is getting his elbow too high when he takes the ball back, and in turn that causes a release point that is too low — closer to Joe Smith’s sidearm angle than Heilman’s optimum three-quarter slot. That low release is giving his changeup some hellacious movement, but it is taking away velocity from his fastball and causing it to run flat and high, rather than with sink. In addition, the low release point puts more strain on the elbow. This issue needs to get fixed fast.

Assuming Heilman’s mechanical issues are a figment of my imagination, and he’s able to pitch 2-3 times per week, that still leaves a gaping hole in the bridge between the seventh inning and Billy Wagner. Randolph will attempt to use Pedro Feliciano and Scott Schoeneweis in the short term, but both are more situational LOOGYs than setup men. Further, both lefties are more valuable in the sixth and seventh innings, and they can’t throw in every single game. That leaves Joe Smith and Ambiorix Burgos, both of whom are impressive but might not be ready for the responsibility of 8th-inning holds.

It may not matter, however, whether the youngsters are ready. Randolph already tested Burgos by leaving him in the game yesterday to face Chase Utley, Ryan Howard, and Pat Burrell. The results were mixed, as Burgos continued to fulfill the rap he brought with him from Kansas City — the long ball bug. Joe Smith might eventually be Heilman’s sidekick in the 8th, but I don’t see Willie putting a rookie in that spot just yet.

Considering Willie’s preference to go with tested veterans in tight spots, it’s unlikely that the Mets would dip into AAA for Lino Urdaneta, despite the fact that he pitched very well in the spring. Jon Adkins and Jorge Sosa are not options either, based on their awful performances in March. It would seem that a setup man would have to come from the outside.

Interestingly, Brad Lidge is no longer the Astros closer, and many think a change of scenery is exactly what Lidge needs to regain the form that pushed Billy Wagner out of Houston. There’s nothing wrong with Lidge’s stuff, nor his health — he’s still throwing in the upper 90s with a nasty slider. His head, however, is another issue, and the Astros’ staff can’t seem to get him right. What Rick Peterson couldn’t do with Victor Zambrano in ten minutes, he might be able to pull off with Lidge — especially if Lidge doesn’t have the pressure of the closer’s role. The main problem with the theory, of course, is that he’d be pitching under the microscope that is New York. But it doesn’t seem to be external pressures affecting Lidge as much as internal confidence. If he can regain confidence in his fastball, he’d be an ideal setup man for Billy Wagner — just as he was in 2003. It’s all about karma, and having life go full-circle, isn’t it ?

The second problem with the idea of reuniting Lidge and Wagner is who the Mets would have to give up in return. Certainly Lastings Milledge is at the top of the list — but with Carlos Gomez batting over .400 in New Orleans, Milledge could be expendable, especially in return for someone at Lidge’s talent level. With the Astros’ rotation in disarray, they might also demand Chan Ho Park or Jason Vargas. If such a deal were on the table, it would be tempting.

The final problem would be Lidge’s happiness in the role of setup man. He’s set up for Wagner before — been there, done that — so why would he want to return to such a situation? It all depends on how interested he is in winning. There aren’t too many contenders of the Mets’ caliber who need a closer this year; the Phillies are the only ones who might, and they’re currently contenders only in their minds. The Reds are the only decent team in need of a closer, but they might have more holes to fill before making a pitch for Lidge. So Lidge wouldn’t have much choice. After a 5.28 ERA last year, Lidge should be happy to still be receiving a big-league paycheck.

There hasn’t been a bit of buzz from the Mets regarding a trade for Lidge, which means it’s definitely a possibility. Omar’s thinktank lets loose no rumors when legitimate deals are in process, so until we hear something in the Post, getting Lidge is a possibility. Give The Jacket ten minutes with Lidge, and I guarantee the eighth inning will no longer be a concern.