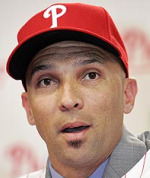 But he sure can hit.

A big hullabaloo focused on Raul Ibanez’ caustic response to the suggestion that he’s on PEDs has permeated all sports media today. I resisted for hours, then finally chose to investigate the whole story. In the end, I believe Raul Ibanez when he says he did not ever take steroids. However, he needs to convince me that he knows how to read.

For the record, it’s not entirely Raul’s fault for all the excitement. Rather, it should be pinned on John Gonzalez, who obviously knows how to read — he’s a journalist for the Philadelphia Inquirer — but apparently does too much “skimming” and not enough “perusing”.

Because if you “peruse” the blog post in question, it turns out that the 42-year-old typing in his mother’s basement (actually, I don’t think he’s that old, but that’s how the classy Ibanez refers to bloggers) actually wrote a several-pointed defense AGAINST the possibility that Raul Ibanez is on PEDs. Read it yourself, and you will agree that Jerod Morris’ article does much more defending than accusing.

Other responses to this ridiculous situation:

RaysIndex calls out Jon Heyman as a hypocrite when it comes to PEDs speculation.

Joe Posnanski, a friend of Ibanez, writes a balanced piece on the debacle. As always, Posnanski “gets it”, and in this post, offers the most plausible reason for Raul’s hot start.

Geoff Baker writes a soapbox-style article about journalism vs. blogging that is so long-winded it wouldn’t fit on Faith on Fear. Ironically, this “journalist” did not do that “journalisy” thing called fact-checking — from his article, it’s clear he did not read Morris’ post. (And for the record, Geoff, the REAL difference between journalists and basement bloggers is that we “BBs” interact with our readership, while you sit perched on a pedestal in your soundproof booth and spout out one-way conversations … you know, like a fascist dictator.)

Big League Stew on Yahoo Canada gives a blow-by-blow account of the controversy.

Back Father’s Day Gifts
Next Mets Game 58: Loss to Phillies