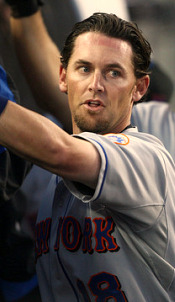 Maybe you (and Jerry Manuel) would recognize him if he were wearing his Mets cap. His name is Jeremy Reed, and despite his .313 average and .343 OBP, he has come to the plate only 13 times this month. Strangely enough, he has watched from the sidelines while the team has struggled offensively. Strangely enough, he has sat on the bench despite displaying the athleticism and running speed ideal for Citi Field and the new-look, no-power, “go-go Mets”. Strangely enough, it is Reed riding the pine while the slap-hitting, slow-running Danny Murphy gets one opportunity after another to stay in the lineup. Strangely enough, Manuel has it in his head that Reed “can’t hit lefties”, despite the fact he is 4-for-4 against them thus far this season. Strangely enough, it is youngsters such as Murphy and Fernando Martinez getting the chance to be the Mets future while the “old” Reed bides his time (Reed turned an aging 28 a few days ago).

Tonight, Jerry Manuel has written out yet another lineup that does not include Jeremy Reed. Against righthander Andy Sonnanstine, the Mets will have Gary Sheffield in left field, Ryan Church in right, Carlos Beltran in center, and Murphy at first base.

Murphy, in fact, is batting second in the order, due to — according to Manuel — his patience at the plate. Manuel likes that Murphy is disciplined and “sees a lot of pitches”. What doesn’t make sense, of course, is that Luis Castillo is batting eighth. For those unaware, Castillo is second in the NL in pitches per plate appearance with 4.40. Murphy is 36th with 3.97. Additionally, Castillo has a .375 OBP, 7 stolen bases, and 6 sacrifice bunts, while Murphy is sporting a .323 OBP, 1 stolen base, and 3 sacrifices. I bring up these particular stats because they are ideal attributes of a #2 hitter. But Manuel has admitted that he doesn’t look too much at the stats. After all, they can’t tell him much about what a ballplayer is likely to do on any given day — he likes to watch BP to get a sense of where guys should go. So I guess Murphy did a great job of watching pitches go by during batting practice this afternoon. Similarly, Jeremy Reed must really be stinking it up in his BP sessions lately.

Back Martinez Down, Evans Up
Next Mets Game 65: Win Over Rays