No Rest for Pedro Feliciano 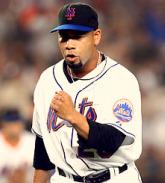 According to the data gathered in the Bullpen Blueprint, a total of 24 pitchers on pennant-contending teams pitched on zero rest (back to back days) 17 times or more last year.

The pitcher who threw on back-to-back days most often in 2008 was Pedro Feliciano — he did it 34 times.

Through the first 67 games of 2009, Pedro Feliciano has pitched in 40 games, with no rest 17 times. Further, Feliciano has appeared in ballgames for the last six days. Days, not games.

Mets manager Jerry Manuel stated that as as long as Feliciano pitches to only one batter, he can pitch as many days in a row as he wants. Two things wrong with that statement. First, we have no idea what that theory is based on, nor what it means. Second, in the last six days, Feliciano has pitched to more than one batter four times. In fact, he threw to 2 batters in 6/16, 4 batters on 6/17, 2 batters on 6/18, and 4 batters last night. His total pitch count is 63 over the six-day period. I don’t know what that means because Feliciano has never thrown six days in a row before, and I’m having a hard time finding another pitcher who has accomplished the feat. That said, we can’t guess at the long-term effect of this frequency of use.

Back Mets Game 67: Loss to Rays
Next What’s Wrong with Bobby Parnell