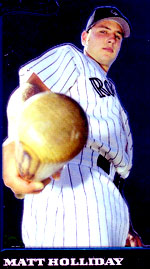 The Mets have a choice: they can lay down against the NL West’s last-place Colorado Rockies, or they can take their frustrations against the Rox. After letting a huge win over John Smoltz and the Braves slip away, it’s time for the Mets to reestablish themselves as contenders. Nothing less than taking two out of three from the Rockies will be accepted. On paper, it should be accomplished, as Colorado is currently struggling, especially with the bats, and the vast expanses of Shea Stadium won’t help their lack of power output. Further, in a series that may well be more about the bullpens than the starters, Colorado manager Clint Hurdle has a volatile group of gas cans to throw on potential fires. Even RoxGirl at The Purple Row admits the Rockies will have it tough this week.

After watching two future Hall of Famers — John Smoltz and Tom Glavine — have relatively little impact on the final result of a baseball game, do we care about the upcoming pitching duels?

Of course we do … what else do we have to ponder about?

The Mets will trot out John Maine, Orlando Hernandez, and Mike Pelfrey vs. Taylor Buchholz, Aaron Cook, and Josh Fogg. For full details on the matchups, see Alex Nelson’s pitching preview at MetsGeek.

We have to feel good about Maine, coming off his near no-hitter. Josh Fogg is the Rockies’ version of Steve Trachsel, so if Mike Pelfrey can give us 6 good innings, we have a fair shot to win that one. The only starter to fear in this series is Aaron Cook, who has two things going for him: first, he’s a sinkerballer in the Tim Hudson style — which seems to wreak havoc with the Mets batters. Second, he’s a guy the Mets did not see at all last year, and we all know how much trouble our veteran lineup has against pitchers they’ve never seen before.

Game one is key; the Mets need John Maine to pull off another good to great performance and let the bats chase Buchholz — a middle reliever before Rodrigo Lopez went on the DL a few days ago — out of the game early. If the Mets can knock Buchholz out by the fifth inning — which is plausible — they can start wearing out the Rockies’ relievers early in the series. Conversely, it would be nice to see Maine give us 7-8 strong innings, and save our suddenly vulnerable bullpen for games two and three. Game three, in particular, looks like it could be a battle of the bullpens, as Mike Pelfrey has yet to prove he’s more than a 5-inning starter, and Fogg is, well, Josh Fogg.

Until yesterday, Carlos Beltran was the hottest hitter in a New York uniform not named Alex Rodriguez. He nearly hit for the cycle twice in a three-game span before going hitless against the Braves.

Jose Reyes has been hot since Opening Day, so we can no longer call him hot — he’s simply great. Reyes has 16 RBI in 17 games out of the leadoff spot, and is hitting .370 with 5 triples, 4 doubles, 2 HRs, a team-leading 11 walks, and is leading the NL with 10 stolen bases and 19 runs scored. His 47 total bases also tie Beltran for the National League lead.

David Wright is cold and confused. However, he’s a career .387 hitter against the Rox, so maybe this is the series he breaks out.

Unless he’s on your fantasy baseball team, you probably didn’t know that Matt Holliday is leading the NL with a .382 batting average. However, Holliday hasn’t hit a homerun since the fourth game of the season, and the Rockies as a team only have 7 home runs this year. That could change, however, if they see enough of Ambiorix Burgos and Scott Schoeneweis.

Todd Helton is back to his old self, minus the power. He’s hitting at a .339 clip with 11 RBI. Garret Atkins is batting .299 and is tied with Holliday for the team lead in homeruns with 2. The only other batter to be concerned about is Brad Hawpe, though his batting average on the road so far this year is 140 points below his Coors Field output (that may not mean anything, as he hit much better away from Coors last year).

Kaz Matsui is on the DL, so fans won’t have the opportunity to give him a warm welcome back.

In case you missed it, the Colorado Rockies publicly outed themselves as a Christian team. They place more value on strong character than performance — witnessed by their recent contract extensions to perennial losers Clint Hurdle and GM Dan O’Dowd — and Rockies CEO Charlie Monfort believes, “Christians, and what they’ve endured, are some of the strongest people in baseball. I believe God sends signs, and we’re seeing those.”

Yikes! Is this the 21st century?

I wonder if God will create a Rockies rally if David Newhan, Shawn Green, and Scott Schoeneweis are on the field at the same time?

Something tells me He has more important things to worry about than helping a last-place baseball team climb out of the cellar. You have to admit, though, there’s some strange stuff going on out there in Denver; I can’t imagine the Colorado fans are happy with a team that rewards mediocrity, and believes that moral values win baseball games. Must be a combination of the thin air and crappy near-beer playing with heads of the Rockies’ front office.

… that at this point in the year, Jose Reyes would have as many walks as Barry Bonds, and 4 more RBI?