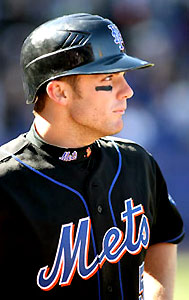 Despite hitting safely in the first 14 games of the year, David Wright has not been … well … “right”.

Nearly one-eighth of the way into the season, and through 69 at-bats, Wright is batting .261 with no homeruns and 4 RBI, and has struck out 20 times. These are not the numbers a team expects from its #5 hitter. Luckily, the bottom third of the Mets order — Moises Alou, Shawn Green, and Jose Valentin — have more than picked up the slack, so Wright’s woes have not been a big deal. But eventually, David must hit. So what’s the problem?

As many have suggested, it may have something to do with issues that have been festering since last year’s All-Star break.

This isn’t the first place you’re hearing someone surmise that the 2006 Home Run Derby was the beginning of Wright’s problems — and despite David’s denial, the fact is, he’s hit only 6 homers since the tater contest. All the pundits point to Bobby Abreu’s similar sapping of power after he was crowned the home run king, and there is something to the theory.

First, you have to wonder if Wright made some kind of preparations prior to last year’s home run contest. Maybe he altered his swing during the last dozen balls in batting practice for the week or two before the All-Star break, to get more lift on the ball. Wright, after all, is a line-drive hitter — similar to Abreu — who hits homeruns more by accident than by trying. As much as we love David, it’s clear that he’s taking full advantage of all New York has to offer — specifically when it comes to self-promotion. That’s not a knock — heck we’d all do the same — but it’s possible he went a bit too far in gaining popularity. Winning the home run contest wouldn’t hurt Wright’s national exposure, and he knew full well the commercial impact of beating celebrity sluggers such as David Ortiz in front of millions of TV viewers.

If you throw out that notion, you must admit that Wright is extremely competitive, and would do everything in his “power” to win even a meaningless homerun contest. Again, nothing wrong with that — his competitive fire and ferocious work ethic are much of the reason we love David Wright. David did not enter the 2006 Home Run Derby to lose, and thus likely made some mechanical adjustments to his swing in order to compete. 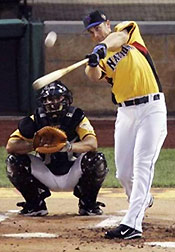 And the results were amazing — Wright knocked 18 balls over the fence in the first two rounds, and lost a close race with Ryan Howard 23-22. During the competition, Wright definitely altered his swing to give the ball more loft. Keith Hernandez has pointed out several times that his swing is more “up” this year than last. So did that homerun contest have a carryover effect into the second half of the 2006 season, and through this April?

The numbers are inconclusive, as Wright hit .305 after the All-Star break — but with a startling drop in power and RBI production. He slumped mightily in August, batting only .245 for the month, but came back to hit .360 in September — though with only 2 homeruns. Logic would suggest that an “up” swing would result in more fly balls, and thus more — not less — homers. Or would it not?

Anyone who has played some competitive baseball knows that trying to hit a home run almost always results in failure (unless you are magnificently gifted). After realizing that he could put a ball over the fence by altering his swing, perhaps David Wright began to use that swing in games — in certain situations of course. Maybe every once in a while, he picked a particular at-bat, against a specific pitcher, and took the approach that he’d put one over the fence. And maybe, little by little, that idea creeped too far into his usual style — in turn screwing up both his thought process and his swing.

But perhaps the high-average, moderate power output is the true David Wright. Maybe Wright’s power surge in the first half of 2006 was an anomaly — or simply a product of luck. Further, maybe Wright is trying to change who he really is — trying to become a 40+ homer guy when in reality he’s a natural 20-25 slugger with a .300 average. There’s nothing wrong with the latter; George Brett built a Hall-of-Fame resume doing just that.

Certainly, Wright is now pressing — and he’s trying to hit his first homerun of the year. Last year, Wright had the same simple approach on every at-bat, every pitch: let the ball get deep, swing at good pitches, and hit the ball up the middle or to the opposite field. On occasion, the pitcher would make a mistake inside and he’d rip one down the third base line or over the left field fence — but for the most part, he’d employ the inside-out swing and hit line drives toward the middle of the field. In the first week or so of the season, Wright seemed OK — not great, but not as bad as he is now. Sometime after that first week, the fact that he was homerless must have entered his mind, because he started swinging at pitches he never offered at before, and let meatballs ride right by. The only time that happens is when a batter is guessing — and that’s what Wright is doing now. Instead of reacting to pitched ball, he’s sitting on what he thinks the pitcher is going to throw, and getting fooled. Instead of trusting his instincts to jump on mistakes, he’s looking for them — anticipating that a breaking pitch will hang where he can bang. As a result, he’s waving at pitches he should be taking, and allowing the hitter’s pitches to glide by untouched. On Sunday afternoon in particular, there were at least two flat sliders that John Smoltz left up in the zone that David should have crushed — but he never considered taking a swing.

In last night’s game against the Rockies, Wright finally drove a ball to the opposite field. It was a great step in the right direction — but it’s kind of scary that we’re getting excited about a flyout. Hopefully, Wright will get his first knock over the fence sooner rather than later, and take that pressure off his mind. More importantly, we should hope that Wright goes back to old approach, and let the homeruns come naturally — by accident. With his swing and strength, David Wright should have no problem generating 25-30 “accidents”, without even thinking about it.

Back Metal Bats Banned in NYC
Next Mets Game 19: Win