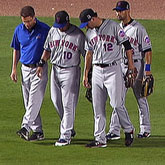 It looked bad when Gary Sheffield came out of last Friday’s game against the Braves. Sheff had been running down a rocket off the bat of Yunel Escobar, then pulled up lame. Everyone assumed it was a hamstring pull. But alas, it was merely “a cramp”.

Our collective sigh over that “close one” has now lasted four days, as Sheffield remains out of the lineup with “cramps”. Is this a menstrual thing? Because that I can understand. Maybe Sheff is having a post-steroid-use issue like Jose Canseco, or maybe he’s on the same stuff Manny Ramirez was caught using, and it’s causing him to have “female issues”. Who knows? But it sure seems strange to have a leg cramp that lasts four days.

Or maybe it’s not a “cramp” but actually a hamstring “pull” or “strain”. There are at least two reasons for the Mets to mis-report the injury. First, the potential loss in ticket sales and other stadium revenues (i.e., tacos, Czechvars, spicy tuna rolls, etc.), because people don’t like paying Yankee Stadium prices for a Tidewater Tides show. Second, there is the outside chance (not likely) that another club is looking for a RH bat — and if Sheffield is placed on the DL, he can’t be traded. Or maybe there’s another conspiracy theory I’m missing.

In other injury news, Fernando Nieve will be out for six weeks. That’s not necessarily a bad thing for ticket sales, since most fans are more interested in seeing Jonathan Niese anyway.

Back Mets Game 92: Win Over Nationals
Next Someone Is On Crack