What Happened to Scott Strickland? 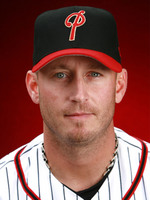 Even if Heilman’s elbow does hold up, he needs help — at least until Guillermo Mota returns. Right now, Joe Smith is the obvious choice, but Willie won’t trust the rookie in tough 8th-inning spots — not yet, anyway. If he’s not going to trust Smith in tight situations, then it might make sense to demote Burgos. After all, you can’t waste two bullpen spots with guys you don’t trust when the game is on the line — not when everyone else is also a question mark.

If Burgos doesn’t progress, and Schoeneweis and Feliciano prove to be no more than LOOGYs, the Mets may have to look outside the organization for some help — since their only options in AAA are Jorge Sosa — who’s been starting — and Lino Urdaneta, who Willie won’t trust anymore than Burgos.

At the end of spring training, a few veteran relievers became available, including Scott Strickland. At the time, it seemed to make sense for Strickland to consider signing with the Mets, as they were looking lean in the bullpen department. However, he would likely have been assigned to AAA New Orleans, and instead stayed with the San Diego Padres — taking his chances with their AAA-affiliate Portland.

So far this year, Strickland has appeared in nine games for the Beavers, and has a 3-1 record and 4.61 ERA with no saves (he’s not the closer). In 13 2/3 innings he’s allowed 11 hits and 9 walks and struck out 15. The strikeout number is nice, but otherwise the stats are nothing to get excited about.

However, he was rocked in his first outing — giving up 4 runs on 4 hits and 2 walks in 2 innings — and that initial appearance has severely skewed his numbers. In contrast, he has not allowed a run in his last 6 outings, spanning 8 1/3 innings. Last year, pitching for AAA Indianapolis, Strickland appeared in 53 games, tossing 73 /13 innings, and had a 2.09 ERA with 70 Ks, 63 hits, and only 15 BB and 4 HR allowed. After that strong showing in 2006, he seemed to earn a shot with someone in MLB this year.

Unfortunately, he picked the Padres, who happen to have one of the best bullpens in baseball. His path to the San Diego roster is currently blocked by Cla Meredith, Scott Linebrink, Kevin Cameron, Doug Brocail, and former Met Heath Bell — all of whom are pitching very well so far this year. If the Padres decide to promote someone from AAA, it most likely will be another former Met — lefthander Royce Ring — as their only weakness seems to be from the south side. In fact, there may be two Portland righthanders ahead of Strickland; closer Leonel Rosales has been lights out with 4 saves and a 0.90 ERA, and setup man Andrew Brown has a sparkling 0.63 ERA.

Considering that depth, the Padres would probably relinquish Strickland for next to nothing (and if they were a standup organization, they’d take back Jon Adkins after fleecing the Mets in the Ring/Bell deal :-). Would the Mets consider such a deal? Why would they try to re-acquire someone who hasn’t pitched regularly in MLB in five years, and who is struggling to stay on a AAA roster?

One reason: to add veteran depth without giving up much value in return.

The biggest issue the Mets have right now is the bullpen, and the best New Orleans has to offer is Jon Adkins — who was abysmal when given an extended chance in spring training, and remains awful in AAA. Further, Willie Randolph says he likes to give the young guys a chance, but in reality, he’s much like his guru Joe Torre in that he tends not to trust youngsters with the 8th-inning role. Smith might be ready to take on that role, but Randolph won’t trust him with it until at least July; when he’s not using Heilman, he’d rather stick with his veteran guys such as Feliciano and Schoeneweis for the majority of the tough spots.

He may not have pitched in an MLB game since 2005, but Strickland does have six years’ experience in the bigs. And he’s pitched as both a setup man and a closer — in fact when the Mets obtained him in 2003, there was talk of Strickland replacing Armando Benitez in the ninth-inning role. The reason? Many insiders felt he had better composure and competitive fire and was less likely to choke as Benitez had in the big games. If that doesn’t sound like a “Willie Randolph guy”, I don’t know what does.

Scott Strickland doesn’t throw in the mid-90s anymore, but what he’s lost in speed he’s gained in guile. Before the Mets start dangling top prospects for an arm, they might consider a low-profile deal to get a guy like Strickland. Even if they’re not ready to give up on Amby Burgos, it makes good sense to stock New Orleans with another veteran arm. Making such a pickup now is better than waiting until it’s a necessity.