How Hurt is Heilman? 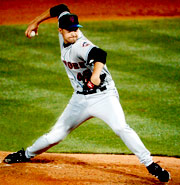 The New York Mets bullpen has me VERY concerned. Every time Aaron Heilman goes out there, I’m expecting his arm to separate and the elbow joint and fly off somewhere beyond the third-base dugout. After Heilman, the next-best reliever is Joe Smith, who has yet to give up a run — but we all know he can’t go an entire season with a 0.00 ERA, so he’s “due”. Whenever Scott Schoeneweis gets into the game, I’m certain he’s going to have an outing like he did against the Braves last Sunday, throwing 25 pitches before getting an out. Similarly, when Ambiorix Burgos jogs to the mound, I’m counting the pitches before he hangs a forkball that gets knocked over the fence. Even Pedro Feliciano has me concerned — it seems like every outing he gets the first two guys out, then starts collecting baserunners. And if Aaron Sele is in the game, I know it’s a blowout.

After Friday night’s game, I wonder if Willie is thinking the same thing. Or, is there something he’s not telling us?

When Oliver Perez came to bat in the top of the sixth with the bases loaded, one out, and a run down, it seemed perplexing to some. Why didn’t Willie have Juliio Franco, or another pinch-hitter, bat for Perez in that spot? The bullpen just had a day off, and the key men seemed to be well-rested. While Mike Pelfrey only gave them three innings on Wednesday, the men who did most of the cleanup — Aaron Sele and Amby Burgos — would not have been called upon. Willie could have used a smorgasboard of his lefties and righties to get through innings 6-8, and had Billy Wagner close things out.

Initially, I was with Willie’s decision to keep Perez in the ballgame, for two reasons: first, he was pitching very well, bouncing back nicely after the first-inning homer by Austin Kearns, and had only thrown 85 pitches to that point. With Perez rolling, why not leave him in there as long as possible, and continue to rest the bullpen? Secondly, I fully expected the Mets to score more than three lousy runs against Nationals pitching, and figured they’d mount another rally the very next inning.

Hindsight, though, is 20-20, and now I’m wondering why did Willie REALLY leave Ollie in? Especially considering that the Nats have a surprisingly strong bullpen, headed by outstanding closer in Chad Cordero?

Here’s my guess: Aaron Heilman’s elbow is more of a concern than we know.

If Guillermo Mota or Duaner Sanchez were on the roster last night, Willie pulls Perez in that spot, because he knows he can have either of them give him four outs and still be ready for Saturday and/or Sunday. With Heilman, he’s not so sure. For one, Randolph is losing trust in Heilman; for another, he’s not sure about his health. Aaron’s 41-pitch outing in Atlanta on April 8th was the start of it (speaking of, what was Willie thinking by leaving him in so long?), and was compounded by another poor appearance against the Braves on the 22nd. Most recently, he pitched one inning of scoreless relief against the Rockies, but anyone who saw the game knows that Heilman escaped by the skin of his teeth — two balls were hit very hard, one right at Carlos Delgado, and another that might have gone over the fence. Whether it’s his health or a mechanical issue (or combination of both), something is not right with Aaron Heilman, and Willie knows it.

Because of this, we may be seeing Heilman used very sparingly — only when the Mets are ahead by one or two runs, only for three batters or less, and rarely on back-to-back days. In fact, it may be a while before we see Aaron start and complete one full inning.

However, that really ties Willie’s hands behind his back, and shortens up an already short bullpen. As well as Joe Smith has been throwing, Randolph won’t trust him implicity for tight 8th-inning situations until Smith proves himself through at least July. It’s true — as much as Willie likes to say he’ll use the young guys, the truth is, he’s much like his guru Joe Torre in that it takes a long time for him to trust a setup man — and longer if it’s a rookie. With that in mind, Willie’s choices are the men who are supposed to be situational lefties — Feliciano and Schoeneweis. Which means, in turn, that he doesn’t always have his LOOGYs to get the tough outs in the 6th and 7th innings. Add in the fact that Amby Burgos is less trusted than Smith, and you can see why Heilman’s health could become a mini-crisis on a team that relies heavily on the bullpen to win games.

In other words, the Mets are going to have a tough row to hoe until Guillermo Mota returns — and that’s assuming Mota will pitch as well off the juice as he did on it. In the interim, logic would dictate that Burgos would be sent down to the minors, and replaced by another reliever, but the fact is, there’s no one in New Orleans that Willie Randolph would trust anymore than Burgos — so it’s a moot point. It’s not like Willie is going to put Lino Urdaneta or Jon Adkins into tight 7th and 8th inning situations. Which is probably part of the reason we’re not seeing Heilman go on the DL — there’s no one to replace him. The Mets are hoping that they can ease Heilman back to health, and in the meantime don’t look too desperate while trying to make a deal for another setup man. If Heilman goes to the DL, the price for, say, Scott Linebrink just went up.

Maybe Aaron Heilman is fine, and just needs to work out a kink in his mechanics, or cortisone shot for his elbow. Something tells me, though, that it’s wishful thinking.