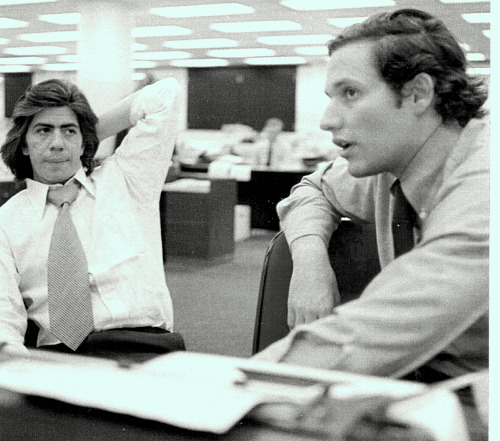 In a remarkable turn of events that may change the course of American history, it has been discovered that journalists Robert Woodward and Carl Bernstein spilled the beans on Watergate as part of a devious plan to become President of the United States and/or gain Presidential Cabinet positions.

According to recently found notes from an old file box that once belonged to W. Mark Felt, Sr. ,

“Woodward wrote all that Watergate stuff not to sell papers, or win a Pulitzer, but to force an impeachment of Richard Nixon and have lobby as Nixon’s most logical replacement.”

” … Bernstein was tired of the newspaper industry — his eyes were on becoming a Presidential speech writer … he had lobby — he lobby to Nixon to be Press Secretary on many occasions.”

One of Woodward’s relatives — and a person familiar with the situation — corraborated Felt’s posthumous remarks:

“As a child, Bobby wasn’t like the other boys … when all the other boys talked about becoming firemen, policemen, or centerfielders for the New York Yankees, Bobby would say he wanted to be President. It was an obsession.”

G. Gordon Liddy could not be reached for comment.

In related news, Mark Fainaru-Wada and Lance Williams admitted that they broke the BALCO story in the San Francisco Chronicle in part to replace Barry Bonds in left field.

“We wanted the Giants to consider us as a platoon — me from the right side and Lance from the left. We thought it was a good plan to tear down Barry and then lobby them for a tryout.”

For those of you looking for something else after seeing this headline, my apologies, and, shame on you!