Why the Mets May Consider Tony LaRussa 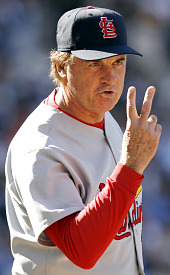 Tony LaRussa is currently busy leading his St. Louis Cardinals into the postseason. But he could be on table of discussion in the Mets front office right now.

After two consecutive collapses and a godawful premiere season in their brand-new, billion-dollar ballpark, the Mets have to do something signficant to win back season-ticket sales their fans in 2010. They absolutely cannot stand pat, or make a few minor changes. In order to sell tickets compete in 2010, they have to make a sales-inspiring announcement drastic change at some point this winter.

But what can they do? If they were tightening the purse strings last winter — BEFORE the Madoff scandal came to light — then certainly they won’t have much money to spend this offseason. So forget about the Mets bidding for the services of Matt Holliday or Jason Bay. In fact, I’d be surprised if they have the money or gumption to go after Chone Figgins, John Lackey, or Rich Harden. My guess? We’ll see Mark DeRosa, Xavier Nady, Jon Garland, Benji Molina, Nick Johnson, and Jason Marquis on their radar. Nice complementary pieces, but hardly impact players.

Further, the Mets have next to nothing to offer in trade for a big-name player. No one of value is healthy enough nor expendable, and they’ll get lambasted if they empty their farm system for one player for the third consecutive winter. So, with no big trades and no big free agent signings on the horizon, the Mets will have to try another route to the back pages.

They will start by promoting John Ricco, either to GM or some kind of parallel position to Omar Minaya. With their budgetary concerns, I would be surprised to see them eat the rest of Minaya’s contract — particularly if they plan to eat Jerry Manuel’s. At the same time I don’t see them spending big bucks to lure Pat Gillick out of retirement, or hiring another big-name GM. They won’t do that because a) they don’t want to spend the money; and b) Jeff Wilpon wants to remain the puppet-master. So forget about the nonsense of bringing in a strong-minded personality such as Billy Beane or Bobby Valentine.

Instead, they’ll do the financially prudent move of keeping Minaya in the organization — in some type of “player evaluation” capacity — and promoting Ricco to GM. Such a decision will be a cheap way of making it look like things are changing, and they’ll spin it by positioning Ricco as a young Brian Cashman or Theo Epstein — a numbers-crunching uber-geek who can use his calculator to lead the Mets into the Promised Land. Maybe he can do that, who knows? … but the decision will be financially motivated, and in keeping with the “Jeff’s in charge” theme.

Still, a change in GM and a few mildly impressive free-agent signings won’t be enough to stimulate season-ticket sales improve the 2010 Mets. Soon after Ricco is promoted, expect to see Manuel ousted and replaced with Tony LaRussa.

LaRussa is most likely a bad fit for the bright hot lights of New York City — he barely gets through the mild-mannered press and forgiving fans in St. Louis. But convincing LaRussa to manage the Mets (3 years / $18M?) will be much cheaper than signing a big-name free-agent. Most importantly, it will be seen as a major change in “the right direction” — substantial enough on its own to sell season tickets position them as a contender.

I could be wrong — the Mets may not have enough money to even afford LaRussa. But I wouldn’t be surprised to see a scenario similar to this unfold in the offseason. If not LaRussa, then another big name that won’t cost a fortune (in comparison to an impact free agent). Perhaps Lou Piniella is let out of his Cubs contract, or Frank Robinson comes out of retirement. Or maybe they do something completely off the wall and hire Gary Carter or Wally Backman (not likely). Whatever it is the Mets do, it will be newsworthy, but unlikely to break the bank.

Back Mets Game 124: Loss to Phillies
Next Jeff Francoeur Has Torn Thumb