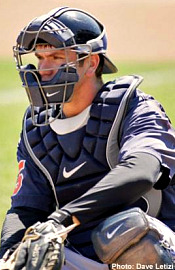 With the rosters expanding to 40 tomorrow, the Mets have announced the promotion of catcher Josh Thole from AA Binghamton.

According to MetsBlog, Thole will wear uniform #30.

Nick Evans is expected to get a callup as well, though it has yet to be announced. The Buffalo Bisons are not exactly brimming with talent, and still have games to play, so more players will trickle in to Flushing over the next two weeks.

Back Was Sean Green Worth All That?
Next Dead End Deals