Thole and Misch a Good Match 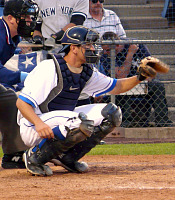 The highly anticipated debut of prospect Josh Thole could have been more difficult, but the Mets made the right move by matching him with lefthander Pat Misch.

Sure, I could be completely wrong — Thole could suffer seven passed balls and six stolen bases, while striking out five times. But I believe the Mets have given him a strong opportunity to succeed by choosing this game, this opponent, and this starting pitcher.

For one, it’s a day game, played outdoors and under natural light. Right there, Thole should be comfortable, as it is always much easier to see the flight of a ball in broad daylight than it is at night under artificial lighting. This is an advantage both in terms of batting and in receiving pitches behind the plate.

Secondly, the Mets have matched Thole with one of their easiest pitchers to catch. Pat Misch relies on pinpoint control, using a small repertoire of pitches that generally range from 70-85 MPH. If anything, he throws too many strikes and is always around the plate. He’s thrown only one wild pitch in his MLB career, and less than a dozen in close to 800 minor league innings. In short, he is a catcher’s dream in terms of receiving the ball. Additionally, Misch is a poised, unflappable, easygoing veteran — no worries about having to calm him down in times of adversity.

Contrast Misch with, say, Oliver Perez, and it’s easy to understand my point.

Neither is easy, but from my own experience, catching a pitcher whom you’ve never caught before can be much harder than hitting one you’ve never faced before — and it all depends on the pitcher’s command, velocity, and repertoire. Someone like Ollie Perez, John Maine, or Bobby Parnell — who throw at high velocity and tend to be all over the place — are extremely difficult to receive because the catcher may have no idea where the ball is going, nor what route it’s going to take, and he has little time to react. Remember the struggles of Brian Schneider early last season? Those were due specifically to the unfamiliarity with the pitching staff, and secondarily to a new glove.

As we’ve been told, Josh Thole has been catching many of the Mets pitchers in the bullpen since his promotion. And that’s good, but not necessarily enough — it depends on the pitcher. Some are around the plate and have pitches that run and break consistently, and you can get a “feel” for the distance they’ll move when they’re not on target. Also, it’s easier when the top velocity is lower, and there are less pitches to “learn” — for example Pedro Feliciano throws only an 87-MPH fastball and a sweeping slider, so he might be easier to catch than, say, Brian Stokes, who can hit 97 MPH with the fastball, and also has varying degrees of success with a curve, slider, changeup, and split. Francisco Rodriguez, I imagine, would also be difficult to catch, mainly because his pitches break so sharply and so late — and often into the ground and wide of the strike zone.

The pitcher’s personality is another can of worms which we won’t get into in depth. But consider this: what if Thole’s MLB debut came last night, and he had to deal with Mike Pelfrey’s case of the yips? Or if he had to get Oliver Perez back on track during one of those “Ollie Innings” ?

Another consideration is calling the game. I would bet that the pitches will be called from the dugout today. After all, Thole doesn’t know much about the strengths and weaknesses of MLB hitters, and isn’t yet familiar with Pat Misch’s game-time abilities.

We’ll see soon enough how well Josh Thole handles himself behind the dish. We’re told his best tool is his bat, and that he needs work on his catching skills. That said, the Mets have made his MLB debut as easy as could possibly be managed. For once, a logical decision based on thought and preparation.

Back Watch Carlos Beltran on Twitter
Next Mets Game 134: Win Over Rockies