John Maine – Ready or Not? 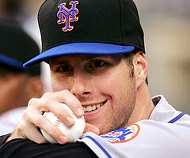 After throwing four innings in a minor league game in Florida, John Maine has proclaimed his arm healthy. The Star-Ledger reports that Maine could soon join the rotation.

In fact, we might see him make a start this coming Sunday, against the Philadelphia Phillies. If so, it would be his first appearance in a big-league game since June 6th. But will his performance in the final weeks of this season truly give us any inkling to his health in 2010?

“It’s a little tight but it’s just getting back to normal,” Maine said when asked how he felt. “But as of now, no pain. I didn’t have any pain (Saturday) night so this feels pretty good.”

Further, Maine explained it was rest that led to his current status — as per the advice of Dr. James Andrews. From the Star-Ledger:

Maine said it was after he met with noted orthopedist James Andrews July 29 that he turned the corner in his comeback. Up until that point, Maine said he had been throwing regularly and the shoulder was not getting better. He still felt the pain in between throwing, and began to think he would not be able to come back this year.

Andrews suggested he stop throwing for a while, and he did, shutting it down for two weeks. That made the difference, he said.

“(That was) something I probably should’ve done earlier but didn’t,” Maine said. “Soon as I was feeling better I started throwing off the mound and long tossing, I knew I was going to pitch (this season).”

Um … so, in other words … what the Mets prescribed for his rehab was NOT working. Ouch.

Though, this latest development should not be misconstrued as Maine being “cured”. According to Maine, he’s not 100%, and doesn’t expect to be — this year, anyway:

“But it is good enough to go out there and throw,” he said. “I’m not hurting, and that’s the main goal.”

A couple of months of not throwing in the offseason will take care of the problem completely, he said.

“I will be fine by spring training, worst case,” he said.

That last sentence is the most telling — particularly for people like me, who are mistrusting and pessimistic by nature.

Isn’t it possible that Maine’s sudden recovery and return to the team has more to do with getting a job for next year than anything else? As of now, Maine is without a contract once the 2009 season ends. The Mets have the option to offer him arbitration or non-tender him. Considering that his current salary is $2.6M, and almost no one ever leaves an arbitration table without a raise, there is significant risk in going that far with an injured pitcher.

If John Maine didn’t return this year, the Mets almost certainly would have non-tendered Maine, and/or offered him a significant reduction in salary (or an incentive-based deal). After all, there was little guarantee of his health.

However, if Maine takes the mound for the Mets in September, and can come close to his usual velocity of 92-94 MPH, the Mets would be hard-pressed to let him walk away — especially since manager Jerry Manuel said this:

Maine, of course, claims the contract issue has nothing to do with his return. That’s the right thing to say, and what we expect to hear. But if he truly believes that, he’s either sitting on a hefty trust fund or he needs a new agent who can explain to him concepts like business and economics. Bills do have to be paid, after all.

So for all we know, Maine’s shoulder problem may or may not be exactly the same as it was in early June, when he said his shoulder “hurts a little bit“, but was able to throw through it nonetheless. If he could throw through the pain back then, why wouldn’t he be able to do it now — especially since he’d only have to grin and bear it for at most 3-4 starts?

Another mysterious quote gleaned from that Star-Ledger article (great job of reporting by Colin Stephenson, by the way):

Maine seemed annoyed at the Mets’ description of his injury as a “weakness” in his shoulder.

Hmm … the Mets call it “weakness” and Maine terms it something else. Obviously, someone is hiding something. But, both parties agree that another surgery is definitely not in the plans. I’m not sure what to make of this misinformation. But it does add another element of worry for Maine’s health in 2010.

Bottom line is this: John Maine can come out and throw bullets in the final weeks of the season, but it may not prove anything about his health, nor will it provide a guarantee for a healthy 2010. But it will have a significant impact on the amount of money he makes next year.

Back Mets Game 137: Win Over Cubs
Next Mets Get PTBNL from Red Sox