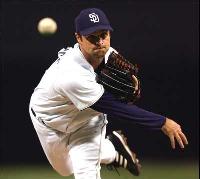 Not to be outdone by the crosstown Yanks, the New York Mets made their own big splash on Sunday, signing righthanded pitcher Brian Lawrence.

It’s interesting, actually, that the Mets beat the Yankees to Lawrence, considering that the “other” New York team is currently counting on pitchers named Darrel Rasner, Jake DeSalvo, and Chase Wright to fill out their rotation. Perhaps they were too preoccupied with the signing of the forty-something, retired / unretired guy from Texas.

What’s significant about the Lawrence signing is that the Mets likely made some kind of promise to him in regard to pitching in the big leagues. Lawrence began the season on the DL, and when he was eligible to come off, was sent on a rehab assignment with the Colorado Springs Sky Sox. His numbers were not good — he started three games, allowed 32 hits in 19 innings, suffering through an 8.69 ERA (batters stroked .376 against him). Of course, it was a rehab assignment, so maybe he wasn’t throwing his full repertoire of pitches. Nonetheless, with numbers like that, it was surprising that Lawrence forced the issue and asked the Rockies to either promote him to the Major League roster or let him go. Considering that he did corner the Rockies into making a decision, and that the Tigers offered him a minor-league contract, it would make sense that the Mets gave him something signficant to sign on. Is Mike Pelfrey bound for New Orleans, for example?

Originally, Lawrence was signed to fill out the back-end of the Colorado rotation, and he pitched well enough in spring training to earn a spot. However, the Rockies wanted to be cautious with the righthander, as he was coming off surgery to repair a torn rotator cuff and torn labrum. He was expected to join the team by May, but unfortunately for him, Josh Fogg (5.67 ERA) and Taylor Buchholz (8.04 ERA) proved to be diehard Jesus freaks, while Lawrence only attends church on Sundays. And faith is not something you can fake.

The big question is, do we care that Brian Lawrence is an option? Before the shoulder surgery that knocked out his 2006 season, he was an average pitcher who pitched a lot of innings, gave up a lot of hits, and won more than he lost only once in five big-league seasons (that one winning year was 15-14). Essentially, he’s a young Steve Trachsel, except that he hasn’t experienced anywhere near the success that Trax had (scary, isn’t it?).

I guess Lawrence is a better option than Chan Ho Park (or Jose Lima, for that matter), but what the Mets need is a bonafide, veteran relief pitcher — not another starter. Though, stockpiling starters is never a bad idea if you can get veterans to accept minor league assignments — especially after witnessing the epidemic the Yankees have suffered. Even if the Mets don’t find him useful, if he can put up decent numbers in AAA, they may be able to turn him over at the trade deadline. Remarkably, several teams expressed interest in the mediocre righty, including the Tigers, Orioles, Padres, and Mariners.

Back Mets Game 30: Loss to Diamondbacks
Next Ricky Ledee Next in Line