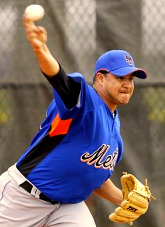 Elmer was the glue in the Mets bullpen down the stretch — if “stretch” is what you want to call the agonizing final two months of the season.

Though he didn’t join the club until late June, Dessens managed to find his way into 28 meaningless games, and posted an impressive 1.04 WHIP over 32.2 IP. If nothing else, the 38-year-old righthander from Mexico proved that he can still reach home plate from 60 feet, 6 inches away.

But what to take away from Elmer’s performance? Hard to say, since many of the games he entered were blowouts, and he rarely pitched under duress. Further, his surprisingly good numbers could have been due to the advantage of being “unknown”; although he’s been in MLB since 1996, he pitched in only 4 games last year for the Braves (3 vs. the Nationals, 1 vs. the Mets), 17 games in 2007, and 19 games in the NL in 2006. One must wonder how well he’d pitch after the scouting reports caught up with him (interestingly, one of his worst outings this year came against the Diamondbacks — the same team that lit him up for 7 runs in a 1.1 inning start in September of 2007).

What gives Dessens a ray of hope is the same set of circumstances that pushed him to the bigs in 2009: who else is there? Yes, he’ll be a 39-year-old journeyman with a sketchy past when spring training rolls around, but the Mets don’t have a plethora of pitchers banging down the door to the big leagues. The sheer lack of depth of MLB-ready pitchers of any talent level forces the Mets to consider any and all options. That said, it can’t hurt the Mets to offer Dessens a minor-league contract for 2010, and stick him in AAA. Buffalo will need a mopup man, and the spot can go either to him or a minor league free agent that is cut loose from another organization. Depending on who becomes available this winter, it may make sense to simply keep Dessens around — sometimes the devil you know is better than the devil you don’t. Scary, huh?

Back Deja Vu All Over Again
Next 2009 Analysis: Pedro Feliciano