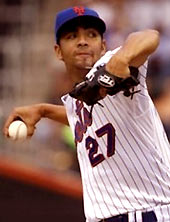 Nelson Figueroa has the heart of a lion and an unflappable calmness when faced with adversity. The statmongers can poo-poo those traits but those are intangibles that are rarely learned. Anyone who doubts their impact may be directed to Oliver Perez, Mike Pelfrey, or any of the dozens of “great talents” who can’t seem to “put it all together”. Figgy may be short on talent, but he’s long on savvy and gets the most from what he has.

Though he had a couple tough outings, for the most part Figueroa was strong as a starter, with a 1.39 WHIP and 7.3 K/9. His complete-game shutout in game 162 was his best as a big leaguer, and capped a strong finish to his season — he allowed only 4 runs in his final 22 innings.

One stat I find interesting: he had a decision in all ten of his starts. What that tells me without going to the game logs is that he hung around long enough in every game to either get the win or loss. Perhaps that’s not an impressive fact for a frontline starter, but for someone who would compete for a back-end rotation spot, it’s an indication that he’ll keep his team within striking distance — and could flourish on a strong club. That really is the crux of Nelson Figueroa — he is not a superstar, and will rarely win a game all on his own. But, he IS a team player, and will be as good as the team he has behind him. Think about that for a moment. It sounds unimpressive and unsexy on the surface, but how many #4 or #5 starters are as good as their team? More frequently, the back-end starters drag a team down to the individual’s inferior level.

The two things I like most about Figgy: he’s unflappable and he’s a ballplayer. By “ballplayer” I mean he plays the entire game — he fields his position extremely well, he backs up bases, he bunts well, he runs the bases well, and he is not an automatic out at the plate. In short, he does everything that he can do. That may seem like a “little” thing, but all of those things add up and can make a difference in a ballgame.

But where does Figgy fit in for 2010? I think the Mets would be smart to offer him at least a minimum-salary, guaranteed MLB contract. Give him a shot to be the long man or possibly the #5 starter. If he doesn’t make the team out of spring training, you have a solid replacement waiting in AAA when the inevitable occurs — and it will occur. There are worse — and more expensive — options.