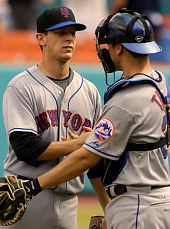 Patrick Misch’s singlemost important contribution to the Mets organization may have been enabling a smooth September debut for rookie catcher Josh Thole. For it was the easy-throwing, level-headed Misch who threw soft darts all around the strike zone, making Thole’s trial by fire a bit less stressful. Can you imagine, for example, if Thole was charged with catching the wild and unstable Oliver Perez in his first few starts behind the dish?

As it turned out, the Misch / Thole battery had its good days and bad days — culminating with the first shutout of the season in game 156 and an impressive five-inning, one-run performance that was cut short by rain in game 161.

Similar to many of the players performing in the late-season auditions, Misch gave us just enough information to neither eliminate nor recommend him for the 2010 team. His was a case of “the more information we get, the less we know”.

As a LOOGY out of the bullpen, Misch was ineffective. Lefthanded hitters mashed him for a .325 AVG., .915 OPS, and hit a homerun once every 20 at-bats. Overall he allowed 24 hits and 13 walks in 22 innings of relief; suffice to say the bullpen is likely not his calling. In 7 starts, he posted a 4.69 ERA and 1.31 WHIP. That is a small sample size, but we saw everything — great outings, awful outings, and average outings.

If one looked only at his final two starts, one might think that Pat Misch is another Jamie Moyer — a crafty, late-blooming lefty who on the verge of a long career of soft-tossing. But then there is that game against the Braves in which he couldn’t get out of the second inning, and was hammered for 8 runs on 7 hits, including 3 homers.

We know Misch rarely reaches 90 MPH, and that to be effective he must have his offspeed pitches working well. His control in terms of strikethrowing is very good, but his command within the zone is inconsistent — he can have bouts of throwing too many hittable pitches over the middle of the plate.

In an effort to figure out who Pat Misch is, we can look at his minor league numbers, but they are equally inconclusive. He had success in AA, but has had varying degrees of success and failure in AAA as both a starter and reliever. The one theme that remains constant in his travels is that he throws strikes. That is usually a good thing but in his case it also means he gets hit — and often, hit hard.

Did he show enough to deserve a shot in spring training as a non-roster invitee? Probably. Should he get an MLB contract? Probably not. But it can’t hurt to have him stashed in AAA, just in case he does in fact develop into the next Jamie Moyer.

Back Dodgers Owners Separate
Next Mets: Who’s the Boss?