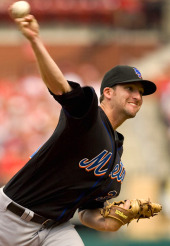 The Mets have jerked around young pitchers before — Aaron Heilman and Grant Roberts are the more prominent recent examples that come to mind — and their inability to make a decision one way or the other regarding Parnell is a symbol of the organization as a whole. It seems no one has the chutzpah to take a stand and stay the course, in any area of the franchise.

But back to Parnell. We know that he can touch triple digits when used as a 15-20-pitch-at-a-time reliever. We also know that his velocity drops dramatically when used as a starter. Regardless of his role, his fastball often has heavy sink, though it just as often sits flat and high in the middle of the strike zone. He has no offspeed pitch to speak of, but he does throw a slider that is deadly about 20% of the time.

In his first professional season as a relief pitcher, Parnell showed flashes of brilliance but overall was inconsistent. Lack of command was a major issue, as was the inability to rely on secondary stuff. Once batters realized all he could get over the plate was the fastball, they sat on it.

Inexplicably, the Mets moved Parnell to the starting rotation after failing in the bullpen. Generally speaking, a pitcher who fails in relief because of a deficiency in repertoire will get slaughtered as a starter, so it was no surprise to anyone (other than the Mets brass) that the “experiment” was a colossal failure. What was more concerning was the fact that Parnell went from throwing 15-20 pitches per outing, 3-4 times per week, to throwing 80-100 pitches once every five days — in the course of two weeks. Where did the Mets come up with that accelerated plan of “stretching him out”, and what was the rush, considering that the team was well out of the race by late July? The quick conversion seemed incongruent with the philosophy of a team that has been so conservative in regard to pitch counts — particularly with young pitchers. It’s interesting that so much buzz surrounded the Yankees’ conservative approach to Joba Chamberlain’s transformation from reliever to starter, yet almost no one questioned the Mets’ handling of Parnell. Few would have faulted the Mets for treating a 100-MPH thrower with kid gloves.

In any case, the bottom line is that Parnell did not establish himself as competent in either role — though some of the blame could go to the way he was handled. It’s clear he has dominating velocity, but it’s also clear he needs more time to develop. The question is, will it be more beneficial for Parnell to pitch as a starter, or to focus on relief? It’s not impossible for a 25-year-old to learn a “plus” secondary pitch, but it’s not easy, either — and without one, starting is out of the question. Right now, Parnell is stuck n a spot from where people like Joselo Diaz, Marcos Carvajal, and Lino Urdaneta never advanced. He may remain there, or he could evolve into a Matt Lindstrom (valuable reliever throwing heat for an inning at a time) or a Mike Pelfrey (enigmatic starter throwing two pitches at similar speeds in the low- to mid-90s). Which way he goes is anyone’s guess, and the Mets seem as clueless as the rest of us.

Back Jason Marquis Wants To Be a Met (?)
Next Is MLB Killing Its Future Fan Base?