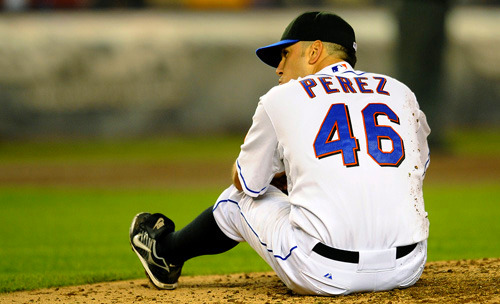 Perez spent most of the season on the disabled list, and pitched poorly during those brief stints off of it. his season-long malaise began before Opening Day, when he supposedly allowed himself to get out of shape during the World Baseball Classic and in turn was lambasted by both Dan Warthen and Johan Santana. From there on, it was all downhill.

Ollie spun one decent game — a 6-inning, 3-hit outing vs. the offensively challenged Padres — out of his first five starts before going on the DL. Though he was among the first of the “cavalry” to go down, most fans saw his knee injury as a blessing, as he was unable to pitch past the fourth inning in any of his other starts.

Perez didn’t make another start until July 8th, and was at best mediocre in 9 starts before undergoing season-ending surgery. We could surmise that his knee never healed, and it was the cause of his poor pitching performances. In a perfect world, the surgery and successful rehab this winter will lead to Oliver Perez returning to the form that made him a 15-game winner in 2007. Unfortunately, it’s hard to say ALL of his problems can be solved that easily.

For one, we can assume that a painful knee would have caused Perez to alter his mechanics — which in turn resulted in lack of command and a dip in velocity. So in addition to getting healthy, Perez will also have to re-discover the mechanics that made him a dominating pitcher. You know the problem with that: no one is sure WHICH style best suits him. Going back to his days in Pittsburgh (and San Diego), Ollie’s biggest issue has been an inability to repeat his pitching motion. He has too many moving parts that have been changed too many times, to the point where he’s not even sure what’s “right”.

During the 2008 season, the media lauded Dan Warthen for “fixing” Oliver Perez after Perez posted a 1.38 ERA through five starts in July and followed that up with another 4 (out of 6) strong starts in August. But the spin doctors didn’t explain Ollie’s disappointing September, and conveniently forgot that his best season came in 2007 under Rick Peterson. Personally, I don’t know that either pitching coach had a magic touch, or if Perez simply responded to a change in the messenger (in both cases). Maybe after hearing someone for too long a time, Ollie loses focus, or stops listening. Or maybe he needs someone to constantly provide direction.

One thing we can all agree upon: Oliver Perez is an enigma. He has displayed an awesome arsenal of tools that can dominate hitters for long stretches — to the point where he could have been considered among the top 5 lefthanders in the NL in 2007. But he’s been just as awful for equally long stretches.

Which Ollie will show up in 2010? Your guess is as good as mine.

Back Can the Mets Use a Mental Coach?
Next The Mets and Milton Bradley