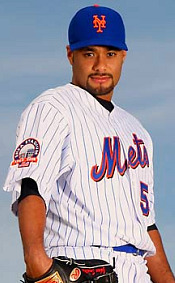 Through the first two months of the 2009 season, Johan Santana was — hands-down — the best pitcher on the planet. In fact, his first ten starts were the stuff of legend, and one of the most auspicious beginnings to a season for any pitcher in modern MLB history (all the more impressive considering he was accomplishing it in a hitter’s era).

At the end of May and through ten (oops) eleven starts his ERA was a miserly 1.77, but his record was “only” 7-4 — mostly because of the lethargic Mets offense but also partially due to Santana’s inability to hang around long enough to be on the winning side. Through most of the season (including and beyond those first two months), he would be spectacular through 6 or 7 innings, but his soaring pitch counts put the ballgame in the hands of an inconsistent bullpen. As I noted in mid-June, he seemed to be moving away from his previously successful strategy (while a Twin) of pitching to contact first and going for strikeouts second — which in turn could increase pitch counts.

As it turns out, the stats don’t necessarily support that theory, as his pitches per plate appearance have remained fairly stable — though, his pitches per inning have raised slightly. His K:BB ratio has dipped considerably in the past few years, however, which explains his inefficiency (well, inefficient for anyone on Planet Johan; mere mortals would be very happy with 15.5 pitches per inning and 7.88 K:BB ratio). In short, he’s not getting outs quite as quickly as he did two years ago, and he’s not getting nearly as many strikeouts — which is alarming considering he moved from the hitter-friendly AL to the non-DH NL.

But even a down year for Johan Santana is still better than 90-95% of every other pitcher in MLB, and Santana filled the role of “ace” admirably. While everyone was dropping with injuries around him, Santana remained standing, taking the ball every five days and competing with earnest. He was tenacious and competitive to a fault, however, as he continued to pitch through an elbow injury that was hidden from the public for much of the year (and forgotten by the front office) and resulted in season-ending surgery (MetsToday suspected Johan Santana had an elbow injury as early as mid-June — one of the few times I wish I was wrong about something).

The (one hundred) million-dollar question is: what will Johan provide the Mets in 2010? From all reports, the elbow surgery to clean out bone chips was a success, and he should be ready by spring training. Certainly, arthoscopy is fairly routine these days, and pitchers almost always return without missing a beat. But this is the Mets, whose unsuccessful history with rehab is MUCH more alarming than the injuries themselves.

Recovery from his elbow problem is not what concerns me, though. I’m more bothered by the fact he had an elbow issue in the first place. He had a similar problem and surgery prior to the 2003 season, and he tore his elbow flexor in 2001. Clearly, there’s something about the way he pitches that his elbow can’t handle — and he’ll be 31 years old by Opening Day 2010. Those filled with optimism will point out that the last time he had elbow surgery, he won the Cy Young Award. The pessimists will wonder if Johan will lose yet another 2-3 MPH from his fastball, and whether that drop in velocity will drop him down to the level of mere mortals.

Personally, I’m in the middle — I think a “new” elbow will result in Santana feeling better than he ever has as a Met, and lead to a spectacular 2010 season. But I also fear that his elbow issues will continue to recur as he ages, to the point that the Mets will regret the final 3 guaranteed years and $80M on his contract. Should the Mets make a postseason run next year, it could be worth it. Moreover, my fears could be unfounded.

But I’m a Mets fan, so can you blame me for lacking confidence?