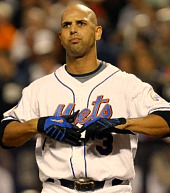 Cora was — for stretches — a very good ballplayer. Almost immediately after Jose Reyes was “day to day”, Cora went on a hot streak offensively, getting on base a blistering 44% of the time and hitting .333 just prior to injuring his thumb in mid-May and landing himself on the DL. When Cora returned, he was still injured — as we found out later, there were torn ligaments in BOTH thumbs — and the magic was gone. Before going on the DL for the second time in August and having season-ending surgery, his numbers dropped dramatically to his final line of .251 AVG, .320 OBP, .310 SLG.

Defensively, Cora was solid if unspectacular. He made all the routine plays, took charge of the infield, and turned the double play with efficiency. His range was limited at shortstop, but he handled what he could reach.

It’s possible that the thumb problems were the reason for the drop-off in production. But you also have to consider that Cora was playing way over his head from the end of April through mid-May — he was on fire for a 20-game stretch. Even had he remained healthy, could he have kept up the pace? History says no. The 34-year-old Cora is a career .246 hitter / .313 OBP. The very best season of his career came when he hit .291 as a 26-year-old through 258 at-bats in 2002. He hit over .250 only 4 other times in his 12-year career (including a .270 mark posted with Boston in 2008).

As an old-school guy, I like Alex Cora because he is a fundamentally sound ballplayer who does his job, plays selflessly, can execute the little things, and remains humble. But at the same time, it’s important that we evaluate Cora for what he is — an average utilityman whose main value is the ability to play several infield positions without embarrassing himself. Given the chance to be more than a once-a-week starter and late-inning defensive replacement, he will become exposed and, over the long run, be more detriment than asset. Though he has been cast as a “leader” by the Mets hype machine, let’s be honest — do you want your team leader to be a bench guy? That didn’t work so well with Julio Franco, remember?

Normally I wouldn’t be so harsh with a player that I respect so highly, but sometimes you need to slap Mets fans in the face to wake them up to reality. Alex Cora did very nicely filling in for 20 games, but it’s doubtful he would’ve continued to be Superman much beyond that streak — with or without injured thumbs. Further, he cost the team $2M in salary — an egregious amount of money for a light-hitting utility infielder. Consider that David Eckstein’s pay in 2009 was $850K, or that MetsToday’s favorite utilityman choice last winter — Juan Uribe (who hit .289 with 16 HR) — was signed by the Giants for $1M. Those two salaries are on the high side for a utilityman.

But it is just as important to point out that we don’t mean to pick on Alex Cora — the Mets routinely pay over-market prices for role players, to the point where it prevents them from signing impact bats and arms. When you add up the salaries of Cora, Tim Redding, and Fernando Tatis, and you could have had Bobby Abreu — with almost a million bucks left over. The case of Tatis is relevant, because he was another long-time MLB veteran utilityman who had one hot streak in 2008 that resulted in the Mets penciling him in as part of a regular OF platoon with Dan Murphy / Ryan Church, and awarding him a $1.7M salary for 2009. Take out Tatis’ on-fire July, and his 2008 season is pretty much representative of his career — a streaky .260 hitter with occasional pop. But fans fell in love with Tatis’ bat that month (as well as his heartwarming charity for his hometown church), the press and SNY announcers pumped up his hustle and leadership, and next thing you know he has a guaranteed contract. A similar situation has evolved around Alex Cora — one where public perception, rather than rationale, insists he come back in 2010.

Again, I like Alex Cora, and I wouldn’t be against his return in 2010. But not for $2M, and not on a guaranteed deal.