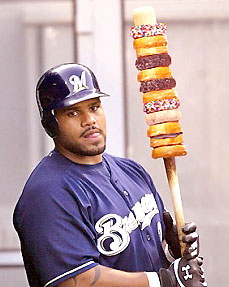 The Brew Crew rolls in with the best record in the Major Leagues, a dominating 24-10 / .706 winning percentage that leads the NL Central by 7 games. They’ve won every series up to this point, and are third in the National League in both hitting and pitching.

Their starting rotation is solid and deep, and their lineup stocked with young up-and-coming stars. Bottom line is, they’re the hottest team and most surprising story in baseball.

However, they haven’t yet faced the Mets — who aren’t too shabby a team themselves.

While the Brewers have the best record in MLB, the Mets lead the Majors in both hitting (.285 AVG.) and pitching (2.90 ERA). In addition, it could be argued that the Mets have played a more competitive schedule, with most of their games against the NL East thus far. In contrast, the Brewers have played against only one team that currently has a winning record — the Los Angeles Dodgers. The combined record of the Brewer opponents (Astros, Cardinals, Cubs, Dodgers, Marlins, Nationals, Pirates, Reds) is an underwhelming 121-148. Now, you can argue that part of the reason those teams have poor records is because the Brewers beat up on them. However, there’s little question that Milwaukee is right now entering the most difficult part of their schedule to this point; they’re facing the Mets at Shea, travel down the Turnpike to play the Phillies, then host the Minnesota Twins for a three-game series before going on the road again for the Dodgers and Padres before returning home for the Braves. How the Brewers do over the next few weeks will likely define their season — and baseball will find out for sure if they’re for real.

But first for them is the Mets, and they have a bit of luck on their side. The pitching matchups clearly favor the Brewers, and though the Mets have a high team batting average, two of their top RBI guys — Carlos Delgado and David Wright — are still battling slumps (though both have shown signs of breaking out). Additionally, after a red-hot April, Moises Alou is ice-cold in May, and trying to shake off a sore shoulder and inflamed knee.

Game 1: Jeff Suppan vs. Jorge Sosa
Suppan’s voo-doo in the NLCS last year erased the Mets, and his remarkably ordinary stuff turns Koufax-like at Shea Stadium. He doesn’t do anything special, but he’s now inside the heads of the Mets hitters — and it’s usually harder to overcome mental mountains than physical ones.

Although Sosa had a brilliant debut with the Mets, don’t count on him to repeat it. He remains Jorge Sosa — an inconsistent, gopher-balling enigma — until he proves otherwise.

Game 2: Ben Sheets vs. Mike Pelfrey
Ben Sheets is the Brewers’ ace, the guy who will start Game One in a playoff series (should the Sewers hang on through September). Mike Pelfrey is a green rookie still trying to fight off the first-inning jitters. Talk about trial by fire. After showing signs of growing up in his last two starts, Pelfrey could have used a less-challenging assignment to help his confidence. But then, if by chance he can pull out a win against Sheets, it could be the turning point in his season.

Game 3: Chris Capuano vs. Oliver Perez
While Sheets is in spirit the Brewer’s ace, Capuano on paper is their top starter. So far this year, Capuano is 5-0 with a 2.31 ERA, and sporting a miniscule 0.53 ERA in his last three starts. Meantime, Perez has been a human yo-yo — either right “on” or way “off”. He’s capable of locking into a pitcher’s duel with Capuano, and just as likely to get bounced from the game by the fourth inning. Which Perez will show up? One encouraging sign: Ollie pitched a masterpiece against the Braves the last time he pitched on a Sunday afternoon at Shea.

For more detailed analysis of the Brewers’ pitching staff, head over to MetsGeek.

Who’s warm: Carlod Delgado and David Wright are showing signs of breaking out. This series would be a GREAT time for both to go on hot streaks. Shawn Green has not gotten a hit since going hairless, but is blistering the ball right at people.

Who’s cold: in the past week, Carlos Beltran is hitting .167, Moises Alou .208. Damion Easley’s average is sinking by the hour, and the reasons he’s a bench player are being exposed with everyday duty. Maybe Ruben Gotay can build on his blast at the bay.

Geoff Jenkins is on one of his unconscious streaks right now, and hitting .341 on the season. Apparently he’d like to be a regular player again.

Shortstop J.J. Hardy is also on a hot streak, batting .429 over his last seven games. Billy Hall, Prince Fielder, and Johnny Estrada are all heating up, just in time for the Mets. Rickie Weeks has been struggling, and brings a .240 average into Shea. The tandem of Craig Counsell and Tony Graffanino at third base (filling in for the injured Corey Koskie) has been an automatic out at the bottom of the lineup thus far. Let’s hope it stays that way.

The Mets will need a minor miracle to pull two out of three from the Brewers this weekend, based on the pitching matchups. If they can chase a starter out early, the Sewers have a strong, deep bullpen. Matt Wise and Brian Shouse are doing a fine job in middle relief, Derrick Turnbow has pitched lights-out in the setup role, and closer Francisco Cordero leads MLB with 15 saves — and is holding opponents to a .077 battinga average. Suffice to say, if the Mets are behind after the seventh, it’s going to be tough to come from behind. But anything can happen. As mentioned earlier, game two could potentially be a turning point for Mike Pelfrey’s season. If he wins, it could be a huge boost to his confidence, enough to propel him into a legit big-league starter. If he loses, it would make his record 0-5, and the Mets might be looking to Jason Vargas the next time Pelfrey’s spot in the rotation arrives.

Back Lawrence: Training Site Still Being Worked Out
Next Mets Game 34: Win over Brewers