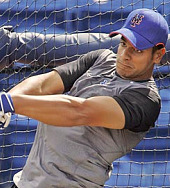 Ever since signing out of the Dominican Republic as a 17-year-old in 2005, fans anxiously awaited the debut of young man touted as the next Mets superstar.

That was the sound of “F-Mart” falling flat in his first shot at the big leagues.

However, it doesn’t mean Fernando will be a bust — quite the contrary. His 2009 MLB debut taught us quite a bit about his skill set, and suggested that he does have a future in the big leagues. The main question is, when will that future begin?

Martinez appeared in 29 ballgames, with nearly equal work in all three outfield positions. In all three spots, F-Mart held his own, displaying good range in the corner spots, decent jumps, and an above-average arm. In centerfield he was adequate to average, but has the raw skills to handle the position well if given the chance to develop there — all he really needs is to further work on reading the flight of the ball and gaining the confidence necessary to take charge as the outfield “captain”.

Offensively, Martinez teetered between looking like an average Major League hitter and getting overmatched. Some may think that’s a slight but it really isn’t — how many 20-year-olds are “average” MLB hitters? Like most young hitters, he needs to learn the strike zone, recognize pitches, understand his strengths and weaknesses, and develop the discipline to put it all together. He has a balanced stance and stride, and his swing is smooth if not consistent — sometimes it’s short, other times a little loopy. From what I’ve seen of him prior to entering the bigs, the loopy swing with the explosion of the hands through contact is the one that sends the ball sailing. But it looked to me as though he cut down his swing at times as a Met — possibly to make more contact, or to go to the opposite field?

Unfortunately, Fernando’s tenure in Flushing came to an unexpected end when he tore the meniscus in his right knee, requiring season-ending surgery. This was somewhat alarming, considering that the 20-year-old hasn’t played a full season at any level during his short pro career due to injuries. In 4 minor league seasons he’s played in 274 games — greatly impeding his development. Despite his inexperience, the Mets kept him on the fast track, and he’s held his own at every level below the bigs.

What he will become is hard to determine, and I don’t understand why he needs to be in a rush to get to “the show”. Most likely his main tool will be his bat, but he hasn’t had the opportunity to develop the homerun power that caused Omar Minaya to compare him to Juan Gonzalez and other sluggers. For most players, that takes time — more than the 1100 at-bats Martinez has seen as a pro. All in all, what I see is a raw kid who already has average MLB skills in most areas of his game, but does not yet show one overwhelming “plus”. The only negative he’s shown is an inconsistency in hustling, but that is more a product of environment and leadership — many 20-year-old kids need to be taught what’s right and wrong.

Bottom line is this: Fernando Martinez’s development as a power hitter will be his ultimate measurement as a big leaguer. Personally I don’t see him turning into a homerun hitter in MLB in 2010, but that doesn’t mean it can’t happen in 2011 – 2013.

Back Q&A and More with Wally Backman
Next Should They Pay Or Just Say No?