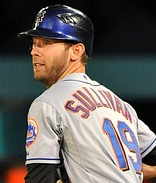 We assume these things because Sullivan, Reed, and Loadenthal are all essentially the same player: lefthanded, singles-hitting, good-fielding outfielders with above-average speed but not enough of any one talent to play every day in MLB.

Don’t get me wrong — I like Cory Sullivan, as well as Reed and Loadenthal. They’re all solid ballplayers with good fundamentals who play hard, and play the game “right”. A championship team needs one of those. But not several, which was why the signing of Sullivan for $600K seemed so strange when Reed was already guaranteed $975K and Loadenthal was stashed in the minors. Not to mention the Mets already had Angel Pagan and Jason Cooper under wraps, and were about to ink Bobby Kielty as well.

As it was, Sullivan had a predictably hum-drum season in AAA Buffalo, splitting time in left and center fields with player such as Jesus Feliciano and the immortal Chip Ambres. But he hit a little hot streak in July, raising his average to .290 — a number that made him one of the very best hitters on a terrible hitting team — and earning him a big league promotion.

Upon arriving in Flushing, Sullivan was immediately confused with Reed, to the point where some conspiracy theorists surmised they were the same person — after all, they never appeared on the field at the same time. Hmmmm …

Seriously though, Sullivan provided similarly workmanlike performance to the “other” Irish, lefthanded, singles-hitting, slick-fielding, outfield hustler on the roster, and had impressive spurts here and there that excited Mets fans for short periods. In the end, he was exactly as advertised: a solid all-around player with good fundies, plenty of hustle, but not quite enough bat to be an everyday outfielder. Definitely worthy of a spot on someone’s MLB roster, and good enough to have a role on a championship club.

Considering that the more expensive Jeremy Reed will likely be non-tendered, Sullivan may have an opportunity with the Mets in 2010. But he might be redundant to Angel Pagan, especially if a big-time left fielder is brought in from the outside. I’d be happy to see him return, but have a feeling he’ll wind up with a big league club outside Flushing.

And that concludes our individual analyses of the 2009 Mets players. Next up, we evaluate the free agent targets — in the meantime you can vote for your favorites.

Back 2009 Analysis: Gary Sheffield
Next Willets Point Suit Thrown Out