With the Mike Pelfrey Experiment officially over, and El Duque still on the DL, the Mets now need a fifth starter. Unless Omar Minaya is about to send Lastings Milledge to Oakland for Danny Haren (not likely), the man to face the Chicago Cubs at Shea on Thursday is likely to come from within the organization.

Down on the farm, both Philip Humber and Jason Vargas have pitched with mixed results. Humber’s jitters in spring training, added to the fact that he’s considered behind Pelfrey in terms of development, would suggest that Vargas is next in line. But will he be on a short leash?

Let’s look at all the in-house options: 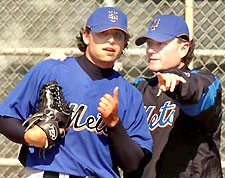 1. Jason Vargas
Vargas was pulled from his Sunday start for the Zephyrs, and Willie Randolph mentioned the little lefty as an option, so it’s assumed he’s Thursday’s starter. It makes sense, considering his previous MLB experience and impressive spring training (2.57 ERA). Though small in stature, Vargas is big in heart, a bulldog of a competitor who may be considered an overachiever. His 5.30 ERA is a bit bloated by the hitter-friendly PCL, but not by much.

2. Philip Humber
Humber may have the biggest upside of the Mets’ pitching prospects, but his spring training jitters were telling in regard to his maturity and confidence. He’s not exactly overwhelming in AAA, but he is pitching in the PCL — notorious as a “hitter’s league”. With the Zephyrs, Humber is 3-4 with a 4.30 ERA, but has pitched only 44 innings in 8 games — barely more than five innings per start. Though he was named the PCL Pitcher of the Week in late April, his performance overall has been less than extraordinary. As he’s still recovering from Tommy John surgery, and trying to build confidence, it’s unlikely the Mets will push him. If he continues to progress, we MIGHT see him in August or September.

3. Aaron Sele
We keep forgetting that Sele was strictly a starter for most of his 15-year career, and made 15 starts for the Dodgers last year. Without Jose Lima and Jeremi Gonzalez on the roster, his appearances have been few and far between — and the Ollie Perez meltdowns may be a thing of the past. He’s pitched admirably in his 9 appearances, showing a sharp 12-6 curve and well-placed fastball. While we’ll likely see Jason Vargas promoted, it doesn’t necessarily mean he’ll be Thursday’s starter. Vargas could be sliding into Sele’s long relief role, affording Aaron the opportunity to start.

4. Brian Lawrence
Signing Lawrence was a smart, shrewd pickup by Minaya. Though he’s little more than another Steve Trachsel — a mediocre innings eater — let’s not forget Trax won 15 games with the Mets offense behind him. Brian Lawrence is not a long-term answer at the back of the rotation, but he could give the Mets a few solid if unspectacular starts, much in the way Dave Williams did last year.

5. Dave Williams
Speaking of Williams, the earliest he can return is late June, according to the Mets. Too bad, because we need him right now. However, there’s a good chance he’ll be needed to provide some spot starts down the stretch — assuming he’s fully recoved from February’s neck surgery and can return to his 2006 form.

6. Kevin Mulvey
What? Kevin Mulvey is an option? While it’s true Mulvey has four ordinary pitches, and only 36 professional innings under his belt, the NJ native has done fairly well thus far with the AA Binghamton Mets. It may not seem plausible to have him jump to the big leagues this early, but consider that the Mets promoted both Mike Pelfrey and Alay Soler in 2006 from that same B-Mets squad — with both starting the season in A-ball. Mulvey has been in AA from day one, and though projects as not much more than the next Brian Bannister, don’t you think Bannister would be on this list if still in the organization?

7. Chan Ho Park
Assuming that the Chan Ho Park Incident of April 30th is still fresh in everyone’s memory — in which, Park compared favorably to Jose Lima — we’ll assume Chan Ho is a longshot to return to the rotation anytime soon.

8. Aaron Heilman
It’s a pretty fair assumption that Heilman will remain in the bullpen through the end of 2007, and probably throughout his tenure in a Mets uniform. However, I can’t in good conscience write a story about potential Mets starters without including him. If he were put on a regular 5-day starter’s routine, his elbow issues would be much easier to manage. Maybe if he continues to give up 8th-inning bombs, his dream of being a starter will finally be realized — though likely with another team.