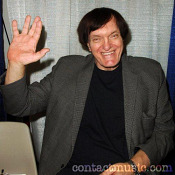 The big rumor out of Indianapolis early this morning was a trade of John Maine to the Brewers for Corey Hart.

As of 9:30 am, however, the deal was either dead or on the back burner, as Milwaukee is focusing on bullpen help.

But what the heck, let’s discuss it — at least until a more salacious rumor comes out of Indy.

Personally, I prefer John Maine to Corey Hart for no logical reason — I simply like John Maine. As a Mets fan he appeals to me mainly for those memorable two weeks in October 2006 and his bulldog demeanor. In contrast, the gangly Corey Hart scares me — he reminds me of actor Richard Kiel (from James Bond and Happy Gilmore, among others).

So my gut tells me that a Maine – Hart deal would be bad — unless it is the precursor of a second deal that sends Hart away for someone else (though that seems unlikely).

Someone working with logic supports my gut feeling. BlueAndOrange.net terms Hart as “Jeff Francoeur 2”, citing a bunch of numbers to explain that Hart’s “Below average plate discipline, decent power and bad defense at a non-premium position make for a largely unappealing package.”

Though the two players differ in several areas, the gist of it is that Hart, like Francoeur, was once an All-Star, regressed significantly, yet may still be overvalued by people like Omar Minaya. Hart has an awkward athleticism not unlike Hunter Pence (or Mike Marshall, for you older Mets fans), in that he’s tall and fast with a decent arm but always looks like he’s about to trip over himself in the outfield. That said I don’t see him as being much better in left field than, say, Josh Willingham, and unless he returns to his 2007 form his bat won’t be enough to make up for it.

On the flip side, as much as I like John Maine I’m concerned he’ll never again pitch well enough to be considered a #3 – #4 starter. In fact he may never pitch enough, period. His poor mechanics will continue to wreak havoc with his fragile shoulder, but more importantly, they prevent him from developing consistent command. He got away without command when he was throwing 94-96 MPH. But if he only tops out at 91-92, that high cheese will be mouthwatering to opposing batters. If my fears are realized, then Maine’s value may never be higher than it is right now.

But in the end, the Mets need all the arms they can get — particularly arms under the age of 30. At this point, a questionable arm is more valuable than a questionable bat.

Back Minaya Lobbies Mixed Messages
Next Will the Mets Land a Big Fish?