Who Is Jake Gautreau?

Omar Minaya made his first trade of 2007, sending a player to be named and cash considerations to the Cleveland Indians for AAA infielder Jake Gautreau.

So who is Jake Gautreau and why do we care?

First, let’s understand the point of this deal: it was made, essentially, because the Mets promoted Ruben Gotay and finally gave up on infielder Chase Lambin (Lambin was released on April 24th). With Gotay on the 25-man roster, the Mets are a little shorthanded in regard to middle infielders in New Orleans. What this deal suggests is that the Mets are committing to Gotay as Easley’s caddy — and that a trade for a second baseman probably won’t be happening. Or, it means that if there is a deal for a 2B, Gotay could be part of it (to the Orioles as part of a package for Brian Roberts?).

As for Gautreau, he was once a highly touted, power-hitting third baseman for Tulane, and Baseball America had high praise for him prior to the 2001 draft:

“With Georgia Tech’s Mark Teixeira sidelined for most of the spring, Gautreau emerged as arguably the best all-around hitter in college baseball. He entered NCAA tournament play as the Division I leader in RBIs (84) and the Conference USA leader in homers (20). He has passed the wood-bat test, hitting .348 with power as Team USA’s first baseman last summer. That might be Gautreau’s position as a pro as well, though Tulane coaches can’t figure out why scouts knock his third-base defense. He lacks speed, but he has the hands and arm for the hot corner. The two-time Conference USA player of the year could go in the first five picks, but he’s more likely to be a mid-first-rounder.” 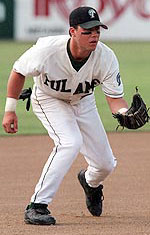 Wow … mentioned in the same breath as Mark Teixeira. As it was, “Jake the Rake” was eventually the first-round pick of the Padres (14th overall) and signed to a $1.875M bonus. Baseball America touted him as the third-best “pure hitter – college” in the draft (some guy named David Wright was ranked the third-best “pure hitter – high school” in that same analysis). In 2002, Gautreau was ranked #77 in BA’s “Top 100 Prospects” in 2002, with an expected ETA of 2004. Yet, here we are in 2007, and he has yet to make his big league debut. What happened?

Part of Gautreau’s lack of progress was due to circumstance. With Sean Burroughs and Phil Nevin ahead of him on the depth chart at 3B, and scouts critical of his defense, the Padres converted him to second base. However, the emergence of Josh Barfield (taken in the 4th round of that same 2001 draft) blocked Gautreau’s path again, and the Padres found themselves with a surplus at the position.

Committing to Bafield, San Diego shopped Gautreau at the trade deadline in July of 2004, and nearly sent him to Texas in return for Brad Fullmer, but the deal was nixed when Fullmer went on the DL with a knee injury. On February 12, 2005, the Padres sent Gautreau to the Indians in return for 3B/OF Corey Smith.

But bad luck wasn’t exactly Gautreau’s issue; other than dominating short-season rookie ball in his first pro season — earning him a promotion all the way to AAA — Gautreau has not put up the offensive numbers everyone predicted. He hit .286 at class A Lake Elsinore in 2002, with 10 homers and 20 doubles in 390 at-bats, but was overmatched in AA Mobile for the next two years. Maybe part of it was being shuffled from third base to second base, and some of it was due to medical issues; he played through an elbow injury in 2003 and also suffered from ulcerative colitis in both 2002 and 2003.

Again, much of Gautreau’s performance could be tied to medical issues. He missed significant time in 2006 due to multiple injuries and more intestinal problems, and has not yet played in 2007 after being treated for skin cancer. (Visit this Portland Beavers archive for a full interview that details some of his physical problems).

If Gautreau’s medical problems are the main reason he hasn’t fulfilled his lofty potential, the question is, will he ever be healthy enough to contribute to the Mets? Maybe not, but Omar Minaya hasn’t given up anything to make this a risky proposition. There are no expectations for Gautreau, and if he can stay healthy, and recover that once-mighty swing, he could be a surprise. In short, a low-risk, high-reward — a typical Minaya deal.

Back Mets Game 38: Loss to Cubs
Next Lino Urdaneta Suspended