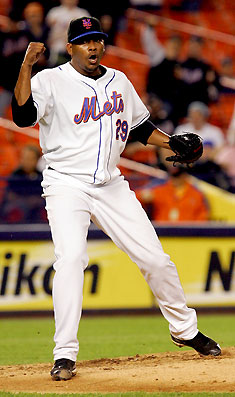 Will Jorge Sosa ever fall back to Earth?

Sosa breezed through seven shutout innings, allowing one hit, two walks and striking out five before running out of gas on his 96th pitch in the 8th.

Speaking of people playing over their head, Damion Easley hit another homerun — a two-run job, just to the left of the bleachers, of course — to put the Mets ahead 4-0 in the bottom of the fourth. Earlier, Easley scored the Mets’ second run on a sac fly by David Wright in the second. The first Met run was also the first Major League RBI for Carlos Gomez, which came on a Texas Leaguer into rightfield that scored Shawn Green.

Gomez collected his second big league ribbie in the seventh, this time on a legit two-bagger down the leftfield line that scored David Wright. That run capped a three-run inning for the Mets, and included an RBI double by Wright, a sac fly by Paul LoDuca, and a

In the bottom of the 7th, with a 6-0 lead, Shawn Green hit a weak bouncer to the second baseman. It was a routine grounder, but Green hustled down the line like it was the last out of the World Series. That’s one of the reasons I truly enjoy watching Green — and this Mets team. These guys — young and old, ahead or behind, in conditions wet or dry — play the game the way it is supposed to be played. Rarely will you see a Mets player “dog it”.

Carlos Delgado went 1-for-3 with an RBI and a stolen base. He is officially tepid.

Joe Smith will not be the recipient of any steak dinners courtesy of Jorge Sosa. For the second time, Smith allowed an inherited runner to score — a run charged to Sosa.

Jose Reyes had two hits but limped out of the game after his second hit in the 8th. Hopefully it was just a muscle cramp or something similarly minor.

Billy Wagner wrapped up the game with a 1-2-3 ninth.

Every Met in the lineup — other than Sosa — had at least one hit.

Thursday afternoon’s 1:10 PM game has Angel Guzman pitching for the Cubs against the Mystery Met. Most signs point to Jason Vargas.

Back Lino Urdaneta Suspended
Next NeverLastings: Milledge on the Move?