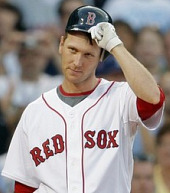 A blizzard has come and gone, and still Jason keeps the Mets at Bay (bad, I know, but couldn’t resist).

But for Jason Bay, time is running out — quickly. He managed to alienate the team he should be signing with, the Red Sox, and they have moved on by signing Mike Cameron. Four more years in Fenway Park would’ve been ideal for padding his stats for a rare second free agency jackpot at age 35 — because he IS going to be worth $16M+ when he’s 35, isn’t he?

Ah, and that’s why I say “no news is good news”: because we know he’s unlikely to be worth that kind of money playing in a park made for Lilliputians, much less one whose dimensions are similar to that of the Grand Canyon.

Bay is a very good all-around ballplayer, and one the Mets can use in their lineup right now — never mind his defensive limitations (people seem to forget 2009’s planned leftfielder was a two-headed Frankenstein made from Dan Murphy and Fernando Tatis). And there’s a good chance Bay will be a good #5 hitter in 2010 and probably 2011. But should your #5 hitter be the third-highest-paid player on your roster? Shouldn’t a man earning that much money be so good that he’s guaranteed an at-bat in the first inning? Or at worst, be a cleanup hitter who can carry the club on his back for weeks at a time?

Therein lies the problem — and one that the Red Sox knew well enough to exit the bidding. Jason Bay is not worth superstar money, and certainly will not be worth it beyond his 34th year of life. He does have power, and his 21 jacks away from Boston prove his homer total is not a product of Fenway. But his batting average dropped considerably, particularly against righthanders, and his OBP was a startling 44 points higher at home. Also bothersome is the fact he hit best buried in the #6 spot in the order (.296 AVG / .429 OBP / 1.035 OPS in 48 games) and hit his worst in the cleanup spot (.234 / .333 / .811 in 52 games). While it’s true his comfort at #6 in 2009 was something of an aberration compared to the rest of his career, it does make you wonder. He was the regular cleanup hitter for lowly Pittsburgh, but on the pennant-contending Red Sox, he was clearly uncomfortable as “the man” in the middle of the lineup. Which is a problem, since the Mets desperately need someone to be “the man”.

That said, if Jason Bay is to sign with the Mets, he will be positioned as “the man” — not unlike Carlos Beltran was back in 2005, and we know how well that worked out. Sure, Bay might do for Beltran what Carlos Delgado did (or vice-versa), but are you willing to bet $64M on it?

No news from Bay continues to be good news for the Mets because each day Bay’s suitors dwindle — just yesterday, Seattle made a move for Milton Bradley that presumably removes them from the bidding. The Mets’ offer to Bay is already a bit too high, but it wouldn’t be a colossal mistake if he accepted. However, it would be if they upped the ante now. If Bay is truly interested in playing in New York for more than just the money, he’ll sign today. But his behavior has suggested otherwise — it appears he’s using the Mets’ offer as leverage to play elsewhere. If that’s true, then again: no news is good news, because to be a star in New York City you must be a challenge-seeker, and one who thrives on the big stage. If Jason Bay is not that type of guy then let him find a deal where he’ll be more comfortable. In the end, it will be best for everyone.

Back How About Miguel Cabrera?
Next Atkins, Gonzalez, Marquis Sign Elsewhere