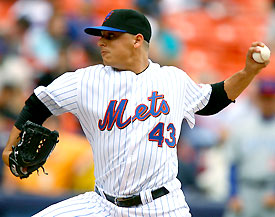 It was only one game, and there’s a good chance it could be his last — at least for a while.

And, Jason Vargas gave up five runs — four the result of two gopher balls in the sixth inning. Hardly impressive. So why would there be any fuss at all about the little lefty?

Call it a hunch, but I think Vargas could one day be a significant contributor to the New York Mets. It may not be this year, and he likely won’t be a star, but from what he’s shown in his miniscule time with the Mets, I think Jason Vargas could evolve into a solid #3 or #4 starter. And in this day and age, that’s high praise for a young hurler.

1. He’s a competitor.
Maybe it has something to do with his small stature, but Vargas has the look and demeanor of a fierce competitor — on a Roger Clemens level (no, he doesn’t have The Roger’s skills, but he does have the game face).

2. He challenges hitters.
Personally, I’m not a big fan of pitching around sluggers. I like to see pitchers who believe in their stuff and go right at guys — regardless of slugging percentage. Vargas backs down from nobody.

3. He throws strikes.
Yes, he gave up two homeruns in one inning. But he did not walk a single batter in seven innings. He may get beat, but he won’t beat himself.

4. He’s efficient with his pitches.
This goes along with #2 and #3. Because he doesn’t pick around the plate like a kid who hates vegetables, and challenges hitters to swing, he gets out of innings in a dozen pitches or less. This is a nice feature for a starting pitcher, and saves the bullpen.

5. He exudes confidence.
Isn’t it really uncomfortable to watch Mike Pelfrey’s discomfort in the first two innings of a ballgame? It’s a lot less stressful to watch Vargas pitch. Even if he gave up five runs in the first inning, Jason’s borderline cockiness would have kept you feeling good about the Mets’ chances in the game.

6. He’s unflappable.
A homerun by Angel Pagan? Whatever. Another homer two batters later to Aramis Ramirez? Hey, sh*t happens, it’s not the end of the world. Vargas kept his composure after the two taters, in a mature way that was comparable to Tom Glavine. Vargas settled down to retire the next two batters, and then threw a hitless seventh. No worries, no panic. Very professional.

7. He’s lefthanded.
Not sure why, but lefthanders are overvalued, and can have longer careers than righties if they so desire.

10. He’s a team player and good guy in the clubhouse.
Or didn’t you notice that his head was shaved clean?

Also, there was a specific game last year — Mike Pelfrey’s first big-league win, ironically — that Vargas came in to relieve Ricky Nolasco in the second game of a doubleheader. The Mets had pounded Nolasco for nine runs in an inning and two-thirds, and manager Joe Girardi asked Vargas to come in and take one for the team. Vargas remained out there for over six innings, allowing another 8 runs, but continued to compete. A dark day in his career, but also evidence of his selfless attitude.

Again, it’s doubtful that Jason Vargas will some day start an All-Star game. However, his makeup suggests that he might someday compare to Bobby Ojeda, or, at worst, a lefthanded Bobby J. Jones — the kind of guy who has a lot of heart, a competitive fire, and won’t wilt under the pressure of a big game. In other words, exactly the type of pitcher valued by a championship team.