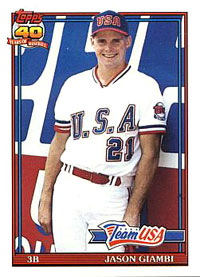 It took a while, but Yankee Jason Giambi finally, publicly admitted to taking performance-enhancing drugs.

Unlike his original public apology — the one in which he didn’t make clear for what exactly he was apologizing — Giambi this time mentioned specifically that he was sorry for taking steroids.

Well, sort of. Actually, he referred to the drugs as “the stuff”, and we can probably infer that “the stuff” is the steroids and human growth hormone mentioned in his grand jury testimony.

“I was wrong for doing that stuff … What we should have done a long time ago was stand up — players, ownership, everybody — and said: ‘We made a mistake.’ … I’m probably tested more than anybody else. I’m not hiding anything. That stuff didn’t help me hit home runs. I don’t care what people say, nothing is going to give you that gift of hitting a baseball.”

Yeah, riiiiiiiiiiight … whatever you say, Jason. So if that “stuff” didn’t help you hit homeruns, then why did you take it? To look good at the beach? To impress the girls with your biceps?

And if they didn’t help you hit homeruns, then why should anyone stand up and apologize? If steroids don’t make you a better player, then what’s the issue? Where was the mistake?

Why Giambi chose now to spill the beans is anybody’s guess. Perhaps to deflect the attention from Kyle Farnsworth?

In any case, thanks for the long-awaited apology. Good thing we weren’t holding our collective breath.

Back Inside Look: New York Yankees
Next Preview: Mets vs. Yankees