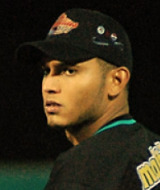 Some of you may remember the very brief career of Carlos Monasterios as a Met.

At the conclusion of the winter meetings this past December, Monasterios was chosen by the Mets in the Rule 5 draft. However, the choice was actually made by the Dodgers, who had given the Mets cash considerations for the right to choose and keep Monasterios.

You might be wondering what’s going on with Monasterios out in Arizona. According to most reports, the sinkerballing Venezuelan has impressed the Dodgers’ staff, and in fact is pegged as some to be their leading candidate for the #5 spot in the LA rotation.

“He has a nice presence,” manager Joe Torre said. “He’s very aggressive. I like what I see.”

Torre didn’t rule out the fifth starter role for Monasterios, even though management usually prefers veterans.

“He hasn’t done anything wrong,” Torre said. “We have four starters that, to me, our fifth spot, just go out and pitch, you know what I mean? We’re not asking him to carry any load, but just give us a chance to win.”

Monasterios is currently ahead of veterans Eric Stults, Ramon Ortiz, and Russ Ortiz for the fifth spot in the Dodgers rotation.

The 24-year-old didn’t pick up a baseball until he was 17 years old, and was one of the key prospects in the trade that sent Bobby Abreu from Philadelphia to the Yankees. He relies on a hard sinker that sits in the low 90, an average slider, and a change-up that has impressed LA pitching coach Rick Honeycutt.

“It’s a huge pitch, when you have that confidence and command,” Honeycutt said. “He’s interesting. Very interesting.”

Of course, the Mets have no need for a #5 starter — their entire staff outside of Johan Santana consists of #5 starters. And it could be argued that the Mets would not have drafted Monasterios had the Dodgers not purchased their pick.

A waste of time, that Rule 5 Draft. Its purpose is to provide pie-in-the-sky hopes for desperate, perennial cellar-dwelling teams like the Dodgers. I mean, it’s not like a team can add a Johan Santana via the Rule 5 Draft or anything.

Back Mike Jacobs Catching Again?
Next The Situation at First Base