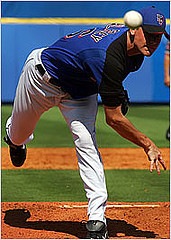 For one, I see someone who is “telegraphing” his pitches — specifically, Pelfrey is slowing down his delivery when he throws off-speed pitches. That needs to be worked out pronto.

Second, I see Big Pelf unable to consistently repeat his mechanics — which is partially because of the previously mentioned issue. The glaring symptom is his follow-through: when he finishes with his head low, “nose to toes”, hand finishing below his front knee and past his left ankle, his command for the most part is good and the pitch is down in the zone. However, about 25-30% of the time, he’s been “cutting off” his pitches, releasing the ball from a slightly higher and more erect position, with his glove pulling a little too much toward first base — the telling sign is a follow-through that is above his front knee (or a pitch up in the zone). Though this delivery could be related to working on off-speed / breaking pitches, I’m seeing it occasionally on fastballs.

Finally, I heard several times during the SNY broadcast that Pelfrey was “using all four pitches”. Whaaaa? What “four pitches”, pray tell? As of September 2009, Pelfrey had somewhat mastered one pitch — a sinker — and was on the way toward mastering a four-seam fastball. His slider was also showing potential, and his changeup needed a lot of work. Yet this spring, in addition to the fastball and sinker, he’s “throwing” a slider, curveball, and split (no official word on the changeup). To me, this is concerning.

I will be the first one to scream that Mike Pelfrey needs to develop his “secondary stuff” — meaning, something other than the fastball / sinker. However, why is he working on 3 or 4 pitches rather than focusing on one? With his hard 95+ MPH four-seamer and bat-breaking sinker already on the way to being plus pitches, you would think the Mets would have him concentrate on MASTERING one more excellent pitch, rather than working on three mediocre pitches. The idea that “more pitches gives the batter more to think about” is overblown — particularly if you can’t command those “more pitches”. In fact, regularly missing with an array of secondary pitches means a batter can sit “dead red” on the fastball.

Since Pelfrey’s debut in 2006, he’s had a heater and a steaming sinker, but no “third” pitch to put him over the top. Four years later, he’s still tinkering with an assortment of secondary pitches, waiting for that third pitch to magically appear — not unlike a card trick.

If Pelfrey would commit to mastering just one pitch at a time, he’d likely come up aces.

Back A Tradition No More
Next Should You Be Concerned About Oliver Perez?