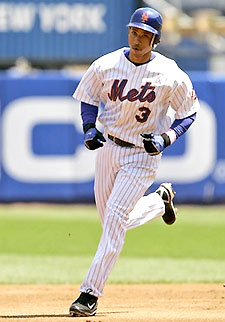 Someone should introduce Willie Randolph to the skinny kid wearing #6, and let Willie know that the kid plays his old position — second base. Because it’s apparent that Mr. Randolph is unaware that there is someone other than Damion Easley capable of manning the keystone.

Let’s get one thing straight: I’m supportive of Easley, and feel he has a place on this Mets 2007 team. However, I’m certain that his place is NOT as an everyday second sacker.

The last time Easley was an everyday player was in 2001, when he was 31 years old. At that time, his bat started to slow, his already limited range was becoming more glaring, and his previously above-average speed reduced to average. It’s now six years later, and all of those statements continue to ring true. If performance-enhancing drugs were still allowed in MLB, Easley might have a fighting chance. Perhaps, while the Mets play in Florida this weekend, he can try visiting the Fountain of Youth in St. Augustine. But the way things stand now, Easley’s bat and legs are slower than they were six years ago, and his fielding is inadequate at best. With his all-around average skills, experience, and occasional pop in the bat, Damion Easley is perfect for the role that he signed on for: super-sub and pinch-hitter.

Yet, Willie Randolph continues to write Easley’s name on the lineup card night after night. Sure, he’s hit 7 homeruns this year — great output for a second baseman — but the bombs do not make up for all of Easley’s shortcomings. Putting him in the lineup because he might hit a homerun is not typical Willie strategy (though it does resemble Joe Torre’s style), which makes this all the more mysterious.

How many more balls need to scoot through the right side of the infield? How many more times does Easley have to botch a routine play? How many more weak ground balls and popups must we witness before Ruben Gotay is given some reps at second base?

It’s understandable that Willie wants to play Easley while he’s swinging a hot bat. But the fact is, his bat isn’t THAT hot. He’s batting .268 in the month of May, with 5 homeruns and 12 RBI. His other ten hits were singles, his OBP is .333, and he’s scored 9 runs. Other than the homers, not much to get excited about. Here’s something else: remove his 3-hit, 4-RBI game against the Brewers — which the Mets won 9-1 — and his batting average plummets to .235, homers go down to 4 and RBI down to 8.

Meanwhile, rotting on the bench is 24-year-old Gotay — he of the slick glove, fast feet, and more than adequate bat. Right now, he’s batting .240 with a .269 OBP — hardly impressive, for sure, but his playing time is limited to pinch-hitting appearances and occasional starts on weekday afternoons. If given the chance, Gotay probably won’t hit a homerun every 11 at-bats the way Easley has, but he has the skills to surpass Easley in every other offensive and defensive category.

Further, it makes sense to play Gotay to thwart the two-sided destruction Carlos Delgado is inflicting on the team lately. First, Delgado on defense looks like a man whose feet are stuck in cement; putting Damion Easley at second merely widens the chasm for grounders to poke through. While Gotay is no Anderson Hernandez, he’s certainly at least two steps better than Easley, and should be able to turn some of those dribblers into outs — this is especially vital when Tom Glavine is on the mound. Secondly, Delgado’s extended slump means the Mets need to make things happen on offense, rather than wait for the homerun. I guess this is part of why Easley’s bat is constantly in the lineup — Willie’s hoping the homers keep coming — but it goes against what Randolph has built over the last two years. Gotay can bunt, hit-and-run, and steal, and has enough speed to avoid hitting into double plays. In other words, he can make things happen, and fits into Willie’s aggressive style of play; think of him as another Endy Chavez.

Again, I have nothing personal against Damion Easley, and in fact think he’s a great piece of the team. However, playing him every day — when there is a skilled and viable option available — makes little sense and is detrimental to long-range success. The more he plays, the more he’s exposed — and the more rusty Ruben Gotay gets on the bench. As long as Easley is popping the ball over the fence, it’s fine to play him 3-4 times a week, at most. He’ll get needed rest to stay fresh but still have his timing, and his inadequecies won’t be so obvious. But believing he’s an everyday player is unfair to him, to Gotay, and the pitching staff — and in the end, all of those players will suffer, as well as the team overall.