Jeff Pearlman on Wally Backman and the ’86 Mets 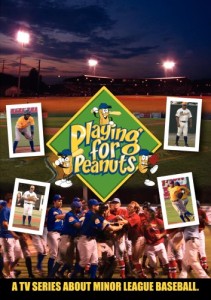 It’s time for another installment of “Playing for Peanuts,” starring current Brooklyn Cyclones manager Wally Backman. Of course, “Playing for Peanuts” is a TV show about Wally’s team in 2007 – the South Georgia Peanuts. It’s a quirky, crazy story about Wally’s attempted comeback as a professional manager. In retrospect, it was a pretty good comeback attempt (Cyclones, remember?), but anyone who watched the show on SNY knows it was a very rocky road back for Wally Backman. Which leads us to…

“Peanuts” producer John Fitzgerald is offering Mets bloggers a $5 commission for every 3-DVD set sold on the web. Not a bad deal for us bloggers, but it also gives you the chance to help support some of your favorite Mets blogs, including OntheBlack, BrooklynMetFan and MetsToday.

The DVD set contains all 10 episodes of “Playing for Peanuts” on 3-DVDs. Also included are bonus scenes and interviews with Ron Darling and Conor Jackson. Click here for ordering information.

Since Backman will be back with the Mets organization this summer, John Fitzgerald will be sending me some of the bonus footage that he has released online, along with some commentary. Here’s the latest:

John Fitzgerald: Jeff Pearlman has a really interesting perspective on Wally Backman and the ’86 Mets – if you haven’t read his book, “The Bad Guys Won,” you should do it. Immediately. It’s one of the best Mets-related books, ever.

When Jeff learned that I was filming a TV series on Wally’s managerial comeback attempt, he was happy to help out by doing an interview. Jeff’s participation set the stage for the first segment of the TV show (Editor’s Note: you can see the first segment here).

In this clip, Jeff explains why Wally Backman was so popular with Mets fans. Jeff compares Backman to former NY Jets wide receiver Wayne Chrebet and he also tells the story of how Backman refused to report to AAA when he was sent back to the minors early in his career.

By the way, you can see all of the Jeff Pearlman interview below. Use the left/right arrows next to the Play button to skip from one clip to the next:

Back Mets Game 31: Loss to Giants
Next What To Do With Oliver Perez